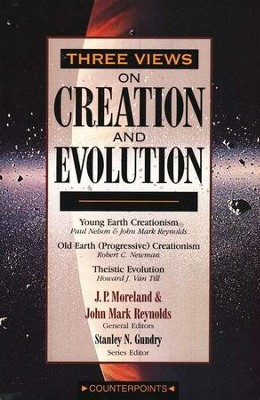 Three Views on Creation and Evolution

▼▲
This spirited debate allows readers to compare the three main evangelical views on creation and evolution, and helps them understand their implications for Christians.

For Christians, the issues raised by the different views on creation and evolution are challenging. Can a "young earth" be reconciled with a universe that appears to be billions of years old? Does scientific evidence point to a God who designed the universe and life in all its complexity? Three Views on Creation and Evolution deals with these and similar concerns as it looks at three dominant schools of Christian thought. Proponents of young earth creationism, old earth creationism, and theistic evolution each present their different views, tell why the controversy is important, and describe the interplay between their understandings of science and theology. Each view is critiqued by various scholars, and the entire discussion is summarized by Phillip E. Johnson and Richard H. Bube. The Counterpoints series provides a forum for comparison and critique of different views on issues important to Christians. Counterpoints books address two categories: Church Life and Bible and Theology. Complete your library with other books in the Counterpoints series.

J.P. Moreland is one of the leading evangelical thinkers of our day.  He is distinguished professor of philosophy at Talbot School of Theology and director of Eidos Christian Center. With degrees in philosophy, theology, and chemistry, Dr. Moreland has taught theology and philosophy at several schools throughout the U.S.  He has authored or coauthored many books, including Philosophical Foundations for a Christian Worldview; Christianity and the Nature of Science; Scaling the Secular City; Does God Exist?; The Lost Virtue of Happiness; and Body and Soul. He is coeditor of Jesus Under Fire: Modern Scholarship Reinvents the Historical Jesus. His work appears in publications such as Christianity Today, Faith and Philosophy, Philosophia Christi, Philosophy and Phenomenological Research, and The American Philosophical Quarterly. Dr. Moreland served with Campus Crusade for ten years, planted two churches, and has spoken on over 200 college campuses and in hundreds of churches.

▼▲
I'm the author/artist and I want to review Three Views on Creation and Evolution.
Back
Back