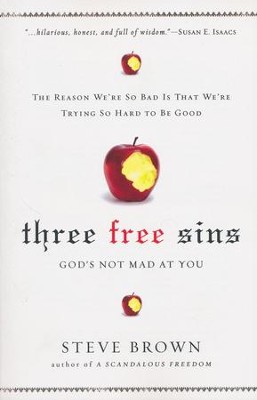 Three Free Sins: A New Perspective on Sin and Grace

▼▲
If you've been trying really hard to be good for God and you keep messing it up, then this book is for you!You know, the reason we're so bad is we're trying so hard to be good. We've missed what God's grace is all about. That's the message of Three Free Sins—how to get free from the misguided obsession with sin management that binds so many Christians. The only people who find true peace and happiness find it as they relax in God's love and forgiveness, knowing that, if they never get any better, God will still love them.

▼▲
"Hilarious, honest, and full of the hard-won wisdom...At its core is this truth: real change only happens when we realize God loves us whether we change or not." —Susan E. Isaacs, author of Angry Conversations With God

From a popular pastor and radio host—Three Free Sins teaches that the only people who make any progress toward being better are those who know that God will still love them, regardless of how good they are.

This book is about the misguided obsession with the management of sin that cripples too many Christians. It’s about the view that religion is all about sin…about how to hide side sin or how to stop sinning all together.

In the Introduction, the author toys good-naturedly with an agitated caller on his radio program, teasing him in a segment where he offers three free sins. The offer is real. Not that Steve has the power to forgive sins, but he wants to make the point that Jesus has made the offer to cover all of our sins – not just three.

Chapter one, titled “Teaching Frogs to Fly,” is even better. The gist of this chapter is that you can’t teach frogs to fly, just like you can’t teach people not to sin. Steve tells a story about a guy who has a frog, and he’s convinced he can teach the frog how to fly. The man keeps throwing the frog up in the air or up against walls – all to the poor frog’s demise. The message is that even though people can be better, they can never not sin—just like a frog can never learn to fly, no matter how much pressure is put on it.

Steve continues through the book to show readers that while they can never manage sin, they can relax in knowing that they are completely forgiven—not just of three, but of all.

▼▲
Dr. Steve Brown is a broadcaster, seminary professor, author, and founder and president of Key Life Network.  He previously served as a pastor for over twenty-five years and now devotes much of his time to the radio broadcasts, Key Life and Steve Brown Etc. Dr. Brown serves as Professor Emeritus of Preaching at Reformed Theological Seminary teaching at the campuses in , and . He sits on the board of the National Religious Broadcasters and Harvest USA. Steve is the author of numerous books, and his articles appear in such magazines and journals as Christianity Today, Leadership, Relevant, Leadership, Decision, Plain Truth and Today's Christian Woman. Traveling extensively, he is a much-in-demand speaker. Steve and his wife Anna have two daughters and three granddaughters.

▼▲
Brown (What Was I Thinking?) intends his approach to be controversial. He tells how he has used the gimmick of three free sins to engage listeners to his radio show and has been rewarded with no shortage of unkind remarks. Brown explains his unorthodox delivery in this way: I decided to ditch the theological and religious words, and to be as outrageous as God was in his giving of himself for us. While the title may appear brash, its underlying concept is certainly orthodox Protestant Christian teaching. Brown asserts that all sins are free for Christian believers because Jesus paid the price for them at his crucifixion. Brown proposes that, instead of trying to be holy, Christians admit and embrace what they really are: forgiven. The book is peppered with humorous tales and personal testimonies that Brown has collected over more than 25 years as a Christian pastor, radio host, and seminary professor, to prove his point. The result is a refreshingly candid view of how Brown sees humans and their relationship with God. Agent: Wolgemuth & Associates. (Feb.) Copyright 2011 Reed Business Information.

▼▲
“My stepfather, Jack, once said, ‘We don't need more people writing Christian books, what we need is more Christians writing good books,’ and I agree with him. Steve has written a good book that is also Christian. I have both learned from it and enjoyed it. You can't get better than that.” —Douglas Gresham, C.S. Lewis's stepson and producer of the Narnia movies
“If you are looking for a book that’s fun to read and, at the same time, able to lead you into deep reflection on how the grace of God lifts the burdens of sin and guilt, you’re going to love Steve Brown’s book. I give it four stars!” —Tony Campolo, Ph.D., Eastern University
"Like me, Steve wholeheartedly believes that the gospel of grace is way more drastic, way more offensive, way more liberating, way more shocking, and way more counterintuitive than any of us realize. Everything here is vintage Steve Brown--the 'ole white guy at his best. Enjoy!" —Tullian Tchividjian, Pastor of Coral Ridge Presbyterian Church in Ft. Lauderdale, Florida and author of Jesus + Nothing = Everything
“After reading Steve Brown's Three Free Sins, this rotten girl redeemed put on a pair of red stilettos and did a happy dance. Three Free Sins is like an old Three Dog Night tune—it'll make you sing along, crazy and loud, happy as all get-out. Steve Brown isn't the old bald guy he claims to be—he's all heart, graceful and true, and his message is indeed Joy to the World.” —Karen Spears Zacharias, author of Will Jesus Buy Me a Double-Wide?
“Once again Steve Brown has done what he does best. He’s pushed the grace envelope. He’s inviting us, no, forcing us to think through the radical implications of the gospel. As I read Three Free Sins, I got the clear impression that Steve wants us to take the command in 1 John 3:1 very seriously: ‘See what great love the Father has lavished on us, that we should be called children of God!’ ‘Look, see, behold! God loves you so outrageously more than all you could ask or imagine, all because of what Jesus has done for you!’ This book isn’t about how the gospel gives us a grace card to live like moral morons, but as those who are radically transformed by the only love that will never let us go.” —Scott Smith, founding pastor of Christ Community Church, author of Objects of His Affection and Everyday Prayers
“If Mark Twain had ever gotten over his cynicism long enough to believe the Gospel, he probably would have written a book like this. This is the kind of book that helps cynics like myself to actually hear the Gospel in the midst of all the social, religious, and political clap-trap that surrounds me. Thank God for friends and audacious preachers like Steve Brown. I am elated that he's still at it, to wit, upsetting the religious gatekeepers by throwing open the Gospel door so that all the riff-raff like me can actually see inside. Wow, there's a party going on! Who woulda thought?” —Buddy Greene, singer/songwriter, entertainer, recording artist
"Steve Brown hates self-help books. Thank God. Three Free Sins is hilarious, honest, and full of the hard-won wisdom only an old guy knows. At its core is this truth: real change only happens when we realize God loves us whether we change or not. Do you know that in your knower? Read this book. It won’t self-help you into frustration. It will change your game. And if you are like me, you’ll laugh out loud, cry a little, and shout, 'Amen! Preach it, Old White Guy!'" —Susan E. Isaacs, author of Angry Conversations With God
"While the title may appear brash, its underlying concept is certainly orthodox Protestant Christian teaching. . . . The book is peppered with humorous tales and personal testimonies that Brown has collected over more than 25 years as a Christian pastor, radio host, and seminary professor, to prove his point. The result is a refreshingly candid view of how Brown sees humans and their relationship with God." —Publishers Weekly, starred review -- Publishers Weekly, starred review

▼▲
I'm the author/artist and I want to review Three Free Sins: A New Perspective on Sin and Grace.
Back
Back