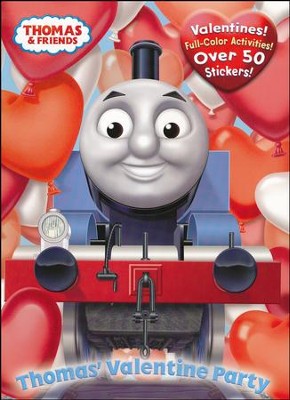 ▼▲
It's Valentine's Day on the Island of Sodor-help Thomas and his engine friends get ready for their party! Featuring over 50 stickers to decorate, and full-color activities including making your own cards, your kids will be ready for Valentine's Day.

▼▲
Fans of Thomas the Tank Engine will love, love, love this Valentine's Day-themed full-color activity book that includes a short, sweet story; pages to color; all sorts of activities, more than 50 stickers, and Valentine's cards to send to friends and family! Train-loving boys and girls ages 3 to 7 will have hours of fun with their favorite Thomas & Friends engines—what's not to love!

▼▲
In the early 1940s, a loving father crafted a small blue wooden engine for his son, Christopher. The stories that this father, Reverend W. Awdry, made up to accompany this wonderful toy were first published in 1945. He continued to create new adventures and characters until 1972, when he retired from writing. Reverend Awdry died in 1997 at the age of 85.

Jim Durk, illustrator of several beloved children's books series ranging from Thomas & Friends and The Powerpuff Girls to Clifford the Big Red Dog and The Rugrats, graduated from Ohio University with a BFA in illustration/painting in 1983. His works include Bear’s House, Brave Little Engines, and Call of the Wild. He is the founder of Durk Illustration, and he lives and works in Cleveland, Ohio.

▼▲
I'm the author/artist and I want to review Thomas' Valentine Party Thomas & Friends.
Back
×
Back
×