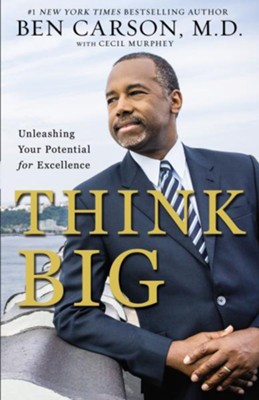 In Think Big, Dr. Ben Carson prescribes his personal formula for success. And who could better advise than a man who has transformed himself from a ghetto kid into the most celebrated pediatric neurosurgeon in the world? With an acrostic, Dr. Carson spells out his philosophy of living. Think Big emphasizes how to evaluate and respond to problems in order to overcome them and make the most of your inner potential.

This book is for you if your life is a series of shattered dreams. This book is for you if you have no dreams at all. It’s for you if you’ve bought the lie that you’ll never amount to anything. That’s not true. Your life is BIG—far bigger than you’ve imagined. Inside these pages lie the keys to recognizing the full potential of your life. You won’t necessarily become a millionaire (though you might), but you will attain a life that is rewarding, significant, and more fruitful than you ever thought possible. The author of this book knows about hardship. Ben Carson grew up in inner-city Detroit. His mother was illiterate. His father had left the family. His grade-school classmates considered Ben stupid. He struggled with a violent temper. In every respect, Ben’s harsh circumstances seemed only to point to a harsher future and a bad end. But that’s not what happened. By applying the principles in this book, Ben rose from his tough life to one of amazing accomplishments and international renown. He learned that he had potential, he learned how to unleash it, and he did. You can too. Put the principles in this book in motion. Things won’t change overnight, but they will change. You can transform your life into one you’ll love, bigger than you’ve ever dreamed.

Dr. Benjamin S. Carson, Sr., M.D., became the chief of pediatric neurosurgery at Johns Hopkins Hospital in 1984 at the age of 33, making him the youngest major division director in the hospital's history. He has written and published nine books, four of which were co-authored with Candy,  his wife of 40 years. Dr. Carson was the recipient of the 2006 Spingarn Medal. In June 2008, he was awarded the Presidential Medal of Freedom. U.S. News Media Group and Harvard's Center for Public Leadership recognized Dr. Carson as one of "America's Best Leaders" in 2008. In 2014, the Gallup Organization, in their annual survey, named Dr. Carson as one of the 10 Most Admired Men in the World.

Dr. Carson and his wife are co-founders of the Carson Scholars Fund, which recognizes young people of all backgrounds for exceptional academic and humanitarian accomplishments. In addition, Dr. Carson is now the Honorary National Chairman of the My Faith Votes campaign and continues to work tirelessly for the cause of the American people.

▼▲
I'm the author/artist and I want to review Think Big: Unleashing Your Potential for Excellence.
Back
×
Back
×