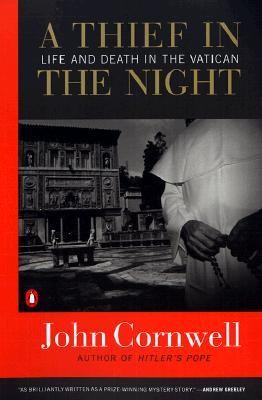 A Thief in the Night: Life and Death in the Vatican

▼▲
"A model of investigatory journalism and a small masterpiece of the genre."—Anthony Burgess

On the eve of September 28, 1978, John Paul I died unexpectedly—apparently of a heart attack—after a reign of only 33 days. But within the Vatican there were serious disagreements about the time of death, who found the body, and the true state of the Pope’s health prior to his death. These arguments led to rumors of foul play and conspiracy—variously involving the KGB, the Freemasons, crooked financiers, and Vatican officials. In 1987, the Vatican invited New York Times–bestselling author John Cornwell to conduct a new, independent investigation into the true circumstances of the Pope’s death. In A Thief in the Night: Life and Death in the Vatican, Cornwell tells the story of his search, including a startling theory about Pope Paul I’s untimely demise—and a chilling and unprecedented look inside one of the world’s oldest, most secretive institutions.

"As brilliantly written as a prize-winning mystery story."—Andrew Greeley

"Brilliant . . . this marvelous and compelling investigation has a terrible ring of truth."—The Times (London)

▼▲
John Cornwell is in the department of history and philosophy of science at Cambridge University. He is a regular feature writer at the Sunday Times (London) and the author and editor of four books on science, including Power to Harm, on the Louisville Prozac trial, as well as Hitler's Pope: The Secret History of Pius XII and Breaking Faith: Can the Catholic Church Save Itself?

▼▲
I'm the author/artist and I want to review A Thief in the Night: Life and Death in the Vatican.
Back