Skip to main content
Get Christmas Ready Sale: Deals on over 1,150 titles thru 9/27.
They Almost Always Come Home - eBook
By: Cynthia Ruchti
Stock No: WW18014EB 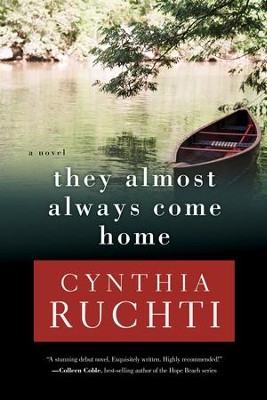 ▼▲
When Libby's husband Greg fails to return from a two-week canoe trip to the Canadian wilderness, the authorities soon write off his disappearance as an unhappy husband's escape from an empty marriage and unrewarding career. Their marriage might have survived if their daughter Lacey hadn't died.and if Greg hadn't been responsible. Libby enlists the aid of her wilderness savvy father-in-law and her faith-walking best friend to help her search for clues to her husband's disappearance.if for no other reason than to free her to move on. What the trio discovers in the search upends Libby's presumptions about her husband and rearranges her faith.

▼▲
Finalist - 2011 Carol Award and 2010 RT Book Reviews Reviewers' Choice Award When Libby’s husband Greg fails to return from a two-week canoe trip to the Canadian wilderness, the authorities soon write off his disappearance as an unhappy husband’s escape from an empty marriage and unrewarding career. Their marriage might have survived if their daughter Lacey hadn’t died . . . and if Greg hadn’t been responsible. Libby enlists the aid of her wilderness savvy father-in-law and her faith-walking best friend to help her search for clues to her husband’s disappearance&hellip;if for no other reason than to free her to move on. What the trio discovers in the search upends Libby’s presumptions about her husband and rearranges her faith.

▼▲
Cynthia Ruchti tells stories hemmed in hope. She’s the award-winning author of 16 books and a frequent speaker for women’s ministry events. She serves as the Professional Relations Liaison for American Christian Fiction Writers, where she helps retailers, libraries, and book clubs connect with the authors and books they love. She lives with her husband in Central Wisconsin. Visit her online at CynthiaRuchti.com.

▼▲
Mystery, lost love, and adventure all dominate in Cynthia Ruchtis novel They Almost Always Come Home. Libbys marriage has been in trouble for several years, but she cant leave her husband if hes missing. Greg went on a canoe trip and was never heard from again. Libby and her best friend, along with Gregs dad, set out to retrace Gregs steps through the Canadian wilderness. But along the way, Libby finds more than she expected. On the one hand, she is overwhelmed by the outdoor beauty of Gods creation, with massive waterfalls, sparkling streams, golden sunsets, gliding eagles, and towering pine trees. On the other hand, the outdoor trek serves as a metaphor for the challenges of a marriage, wherein a wrong turn or a misread trail sign can lead to disaster.

The book is well written and dynamic. Through intensive dialogue and insertions of key back story episodes, readers can relate to the pain and conflict Libby and Greg have experienced. The characters must examine their commitment to each other, to God, and to those they love. The changes they experience during the story are believable, but not predictable. Ruchti combines aspects of every day life and outdoor adventure to draw the reader in. Because this novel shows both female and male perspectives, I would recommend it to all adults and older teens.  Grace C. Yates, www.ChristianBookPreviews.com

▼▲
In Ruchti's debut faith-based novel, Libby and Greg's marriage is sputtering in the wake of their daughter's death. Libby's thinking about leavinguntil she's faced with the prospect of becoming a widow when Greg fails to return from a solo trip to the Canadian wilderness. As Libby, her best friend Jen, and father-in-law Frank go after Greg to bring him back or learn his fate, Libby also learns about herself, family, and faith. It's a great premise, and Ruchti has enough energy to make the suspense last for just about the whole book, even as she unpacks the marriage troubles in the background and the character interplay among the searchers in the foreground. A lot of readers will like Libby, who is flawed enough to be humble and teachable; a few might find her brittle and defensive wit (rocks with bad toupees of lichen) a little much. Libby's friend Jen, however, is improbably saintly. Crisp dialogue propels the story forward unobtrusively. Ruchti shows imagination and promise. (May) Copyright 2010 Reed Business Information.

▼▲
I'm the author/artist and I want to review They Almost Always Come Home - eBook.
Back
Back