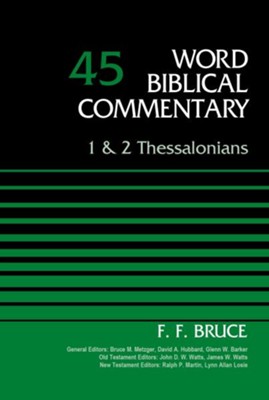 F. F. Bruce (1910-1990) was Rylands Professor of Biblical Criticism and Exegesis at the University of Manchester. Trained as a classicist, Bruce authored more than 50 books on the New Testament and served as the editor for the New International Commentary on the New Testament from 1962 until his death in 1990.


James W. Watts is a professor and chair of the Department of Religion at Syracuse University. His teaching and research interests include biblical studies, especially the Torah/Pentateuch, ritual theories, rhetorical analysis, and comparative scriptures studies. He is a co-founder of the Iconic Books Project. He had served as the associate Old Testament editor of the Word Biblical Commentary (1997 - 2011).

▼▲
I'm the author/artist and I want to review 1 & 2 Thessalonians: Word Biblical Commentary, Volume 45 [WBC].
Back