Skip to main content
These Nameless Things
By: Shawn Smucker
Stock No: WW735306 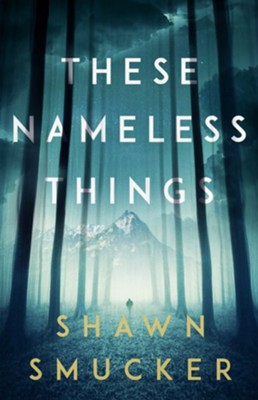 Once held captive and tortured on a mysterious mountain, Dan was lucky to have
made it out alive. But freedom comes at a cost. Left with little memory of the
horrific ordeal, Dan remembers one thing—his escape meant having to leave his
brother behind.With each day that passes, Dan waits with other survivors in hope of his brother’s escape. But just as long-forgotten memories start rising to the surface, the sudden appearance of a wounded woman throws everything further into question. As Dan struggles to know whom to trust, he is caught once again in aparalyzing moral dilemma—but this time, will he choose to save his own life or his brother’s life?

A poignant tale of the bonds of brotherhood, These Nameless Things will have readers frantically flipping pages for answers in this thought-provoking narrative.

▼▲
Before Dan opened his door to find a wounded woman who had escaped from the tormentors in the mountain, his life had become rather quiet. He and the eight other people in the mostly abandoned town had become friends. They spent peaceful evenings around the campfire and even made vague plans to journey east one day and leave the ominous mountain behind.

But the woman's arrival changes everything.
Who is she? How does she know so much about Dan's brother, who is still held captive in the mountain? Why are long-forgotten memories rising to the surface? And why does Dan feel so compelled to keep her presence in his house a secret?

Visionary writer Shawn Smucker is back with an unsettling story that invites us to consider two challenging questions: To what lengths will we go to assuage our own guilt? and Is there a limit to the things we will do for the people we love?

▼▲
Shawn Smucker is the award-winning author of Light from Distant Stars, the young adult novels The Day the Angels Fell and The Edge of Over There, and the memoir Once We Were Strangers. He lives with his wife and six children in Lancaster, Pennsylvania. You can find him online at www.shawnsmucker.com.

These Nameless Things is the second adult fiction title that you’ve written, after Light from Distant Stars. How is These Nameless Things similar to the other books you’ve written? How is it different?
These Nameless Things, much like my other novels, explores the bonds of family, the loyalty and the pain that family relationships can cause, and how our choices affect the direction of our lives. The past also plays a large role in the story—all of the people in the book are connected through a past event,
and as this event is slowly revealed, you begin to realize why everyone is waiting. The book is different from what I’ve done previously because it’s in a very unique setting. That’s all I’ll say for now.

Did anything surprise you as this novel was coming together?
Unexpected characters appeared, and the history of each character was revealed to me as I wrote, so
that was fun. I write about memory so much, and I love exploring this idea that how we remember our
lives has a major impact on who we are and how we see the world around us.
Also, Dan’s selfishness surprised me. Abe’s grace and love surprised me.

Although These Nameless Things explores some difficult questions, it also includes elements of redemption and hope. How are these portrayed in your story?
The fact that in the abyss, Dan and Miho and Adam find love and camaraderie shows that even in the most evil places, two people can still choose to love each other. Forgiveness is also a big theme, and what is more hopeful and redemptive than forgiveness?

You’ve said before that your stories take place at the edge of the imagination, with one foot in reality and one foot in the unknown. Can you describe the role that magical realism plays in this
particular story?
This story is set at the edge of Dante’s Inferno, albeit a more real, tangible version with no demons or angels. I wanted to explore what happens to people at the edge of such a place.

What do you hope readers take away from this novel?
That no one is a lost cause. That sometimes the only way to move forward in life is through forgiveness. That there is grace even to the very end.
What are you working on next? I’m in the early stages of writing my next novel. It’s still taking shape, but I will say it is influenced a lot by George MacDonald.

How can readers connect with you?
You can find me at shawnsmucker.com or on Twitter and Instagram @shawnsmucker.

▼▲
I'm the author/artist and I want to review These Nameless Things.
Back
Back