Skip to main content
Get Christmas Ready Sale: Deals on over 1,150 titles thru 9/27.
There Is a God: How The World's Most Notorious Atheist Changed His Mind
By: Antony Flew, Roy Abraham Varghese
Stock No: WW335303 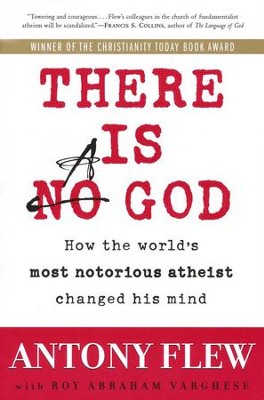 There Is a God: How The World's Most Notorious Atheist Changed His Mind

▼▲
Once called the grandfather of modern atheism, Flew now argues for God's existence in this startling testimony! With refreshing openness to argument and an absence of anger and hostility, he reveals the scientific discoveries and philosophical viewpoints that turned him from non-believing into having faith in God as Designer. Eye-opening! 256 pages, softcover from HarperOne.

In There Is a God, one of the world's preeminent atheists discloses how his commitment to "follow the argument wherever it leads" led him to a belief in God as Creator. This is a compelling and refreshingly open-minded argument that will forever change the atheism debate.

Philosopher and former atheist Antony Flew set the agenda for modern atheism with his 1950 essay "Theology and Falsification," which became the most widely reprinted philosophical publication of the last half century. Flew has published over thirty books, including God and Philosophy, The Presumption of Atheism, and How to Think Straight. He spent twenty years as professor of philosophy at the University of Keele and has also held positions at Oxford, the University of Aberdeen, and the University of Reading. He now lives in Reading, England.

▼▲
“A clear, accessible account of the ‘pilgrimage of reason’ which has led Flew to a belief in God.”
“Antony Flew’s book will incense atheists who suppose (erroneously) that science proves there is no God.”
“Flew couldn’t be more engaging and remain an analytic philosopher...”
“In clear prose and brief chapters, Flew explains the four lines of evidence that convinced him....An intellectual conversion of great significance.”
“The most lucid and penetrative pieces of philosophical theology to appear in years, altogether brilliant.”
“A most valuable and readable overview of the many evidential changes of landscape that 20th century science is furnishing to the oldest question in Western civilization: Is there a God?”
“Towering and courageous... Flew’s colleagues in the church of fundamentalist atheism will be scandalized.”
“A very clear and readable book tracing his path back to theism, revealing his total openness to new rational arguments.”
“This is a remarkable book in many ways.”
“This is a fascinating and very readable account …”
“A stellar philosophical mind ponders the latest scientific results. The conclusion: a God stands behind the rationality of nature.”
“Antony Flew not only has the philosophical virtues; he has the virtues of the philosopher. Civil in argument, relentlessly reasonable….”
“A fascinating record …it will come as a most uncomfortable jolt to those who were once his fellow atheists.”
“Flew’s exposition will be a source for reflective inquiry for many, many years...”

▼▲
I'm the author/artist and I want to review There Is a God: How The World's Most Notorious Atheist Changed His Mind.
Back
Back