Skip to main content
BIBLE SALE OF THE SEASON: For a Limited Time ~ Save on over 1,100 Bibles!
Theological Wordbook of the Old Testament, One-Volume Edition
By: R. Laird Harris, Gleason L. Archer Jr., Bruce K. Waltke
Stock No: WW6495 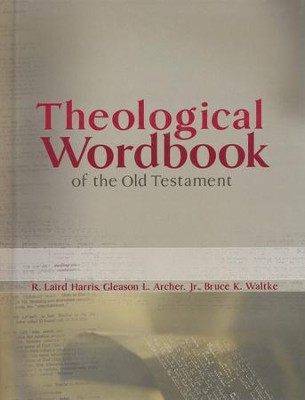 ▼▲
This extensive, scholarly work includes discussions of every Hebrew word of theological significance in the Old Testament, plus brief definitions of all other words found in Brown, Driver and Briggs Hebrew Lexicon. Keyed to Strong's Concordance, this book has been a longtime favorite of Bible students. Features:

For busy yet serious students of the Old Testament

This extensive scholarly work includes discussions of every Hebrew word of theological significance in the Old Testament, plus brief definitions of all other words found in the Brown-Driver-Briggs (BDB) Hebrew Lexicon. Keyed to Strong’s Concordance, the Theological Wordbook of the Old Testament has been a longtime favorite of serious students of the Bible—pastors and laypeople alike. The busy pastor or earnest Christian worker who has neither the time nor the background for detailed technical study, yet desires to understand important terms, will enjoy this practical resource.

There are more than 1,400 articles written by 43 Old Testament scholars, plus some 400 sub-entries giving definitions only. The articles focus on theological meanings of importance and do not include lengthy, technical, linguistic discussions. Virtually exhaustive bibliographies of published material relating to the words discussed are also included, as is a special section of Aramaic words used in the Old Testament.

The new edition of this monumental reference work combines two volumes into one, now making it even easier to use.

▼▲
R. LAIRD HARRIS (1911-2008) (B.S., University of Delaware; M.A., University of Pennsylvania; Th.B. and Th.M., Westminster Theological Seminary; Ph.D., Dropsie University) served as Professor of Old Testament at Covenant Theological Seminary. Widely known and respected for his biblical scholarship, he completed significant work in the study of theology and science, particularly dealing with creation and evolution. Dr. Harris served as chairman of the Committee on Bible Translation which produced the New International Version. He is co-author of Theological Wordbook of the Old Testament, and is the author of The Inspiration and Canonicity of the Bible, Introductory Hebrew Grammar, and Man: God's Eternal Creation.

GLEASON L. ARCHER, JR. (1916-2004), (B.A., M.A., Ph.D., Harvard University; B.D., Princeton Theological Seminary; L.L.B., Suffolk Law School) was a biblical scholar, theologian, educator, and author. He authored numerous books, including In the Shadow of the Cross, The Epistle to the Hebrews: A Study Manual, and Survey of Old Testament Introduction. His instrumental work in the preparation of the Old Testament portion of the New American Standard Bible has gained wide acclaim and positioned him as a world-renowned scholar.

▼▲
I'm the author/artist and I want to review Theological Wordbook of the Old Testament, One-Volume Edition.
Back
Back