EARLY CHRISTMAS SALE: Shop over 900 items up to 85% off through 9/29 >
Theological Roots of Pentecostalism
By: Donald W. Dayton 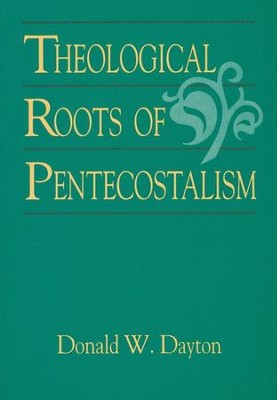 ▼▲
The global rise of Pentecostalism in the 20th Century is, arguably, one of the most significant developments in the history of the church. In this groundbreaking study, Donald Dayton examines the Theological Roots of Pentecostalism as it grew out of Methodism, and early colonial, and post-colonial American revivals and grass-roots ministry. Primarily, Dayton asserts these "theological roots" are grown from a Methodist theological seed, and the movement was therefore not simply an organic and spontaneous movement. This book is a crucial link in understanding how what has become the world's fastest growing Christian movement began, and from where the derived their impetus. This book is an excellent resource for Historical Theologians, and Church Historians alike, and anyone interested in Pentecostalism, its doctrines, its practice, and its world-wide expansion.

▼▲
Pentecostalism is one of the most dynamic forces in twentieth-century Christianity. From fast-growing denominations such as the Assemblies of God to popular television ministries such as "The 700 Club," the fruits of Pentecostalism can be seen throughout modern Christian life.

In this landmark study, Donald Dayton explains how Pentecostalism grew out of Methodism and the nineteenth-century holiness revivals. He finds evidence of Wesleyan teaching in the classic writings of many Pentecostal leaders. He shows how Pentecostalism is rooted in the Wesleyan theological tradition, rather than being a contrived system of modern revivalistic ides. Martin E. Marty says in his foreword that Pentecostals "have no choice, it is clear from this book, but to see that there were . . . roots to the growth they reaped." He calls Theological Roots of Pentecostalism "a very important statement . . . one without which subsequent commentators on Pentecostalism are not likely to give intelligent accounts."

▼▲
Donald W. Dayton is professor of theology and ethics at Northern Baptist Theological Seminary in Lombard, Illinois. He received his PhD from the University of Chicago.

▼▲
I'm the author/artist and I want to review Theological Roots of Pentecostalism.
Back
×
Back
×