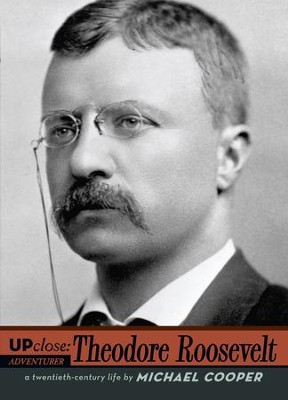 By: Michael Cooper
More in Up Close Series
Viking Books for Young Readers / 2009 / ePub
Write a Review
In Stock
Stock No: WW47655EB

▼▲
Two-term president. Nobel Peace Prize winner. Commander of the Rough Riders. Avid conservationist. Adventurer. All of these and more, Theodore Roosevelt lived his long life to the fullest and left a legacy still remembered more than ninety years after his death. He started his long, successful political career at just twenty-three in New York State, and continued working in the public arena until well after his second term as president. Up Close biographer Michael C. Cooper takes readers beyond T.R.'s bold-faced achievements and explores the driving forces behind one of this country's greatest leaders.

▼▲
Michael Cooper is the author of fifteen nonfiction books for children, including Dust to Eat. He lives in southeastern Kentucky.

▼▲
I'm the author/artist and I want to review Theodore Roosevelt - eBook.
Back
×
Back
×