Skip to main content
SPRING CYBER EVENT STARTS NOW: And it's a really BIG deal! Up to 88% off through 5/24>
How Then Should We Eat the Lord's Supper
By: Robert A. French
Stock No: WW979482 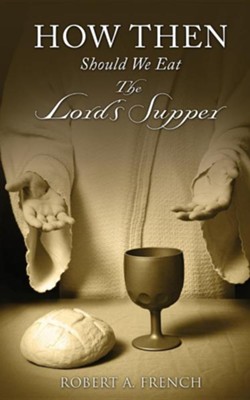 How Then Should We Eat the Lord's Supper

▼▲
From the birth, death and resurrection of Jesus men have attempted to follow him by building narrow structures around doctrines that may or may not reflect the truth of the Scripture they suppose to base it on. Many Christian religions, when teaching about their foundational doctrine on which they base their faith, refer the seeker to the tradition of their particular church rather than the biblical basis. Traditions appear in many ways in formal religion, but the most obvious is in ceremonial and sacramental worship. In the pages that follow, I will attempt to show the importance and the absolute necessity of getting past the traditions of men. It is not my intention here to attack religions, but rather to show the error of accepting a tradition over scriptural truth. When speaking of religion, in this book I refer to the system that has been set in place, and not necessarily all the people that have membership in such a group. Robert A. French Robert (Bob) French has been in the ministry for over fifty years and during that time he has been an evangelist, a pastor, and missionary and has ministered in many countries and islands of the sea. He is now pastor of Balance Life Christian Fellowship in the city of St. Charles Missouri. Through the years Bro. French has conducted tent and auditorium meetings as well as speaking in hundreds of churches. He has pioneered in several places including the island of Puerto Rico where he and his wife spent three years in the San Juan area. Bro. French has spent a great deal of time working in Mexico and along with his oldest son Brian. He spends most of his time these days ministering to his local congregation and writing.

▼▲
I'm the author/artist and I want to review How Then Should We Eat the Lord's Supper.
Back