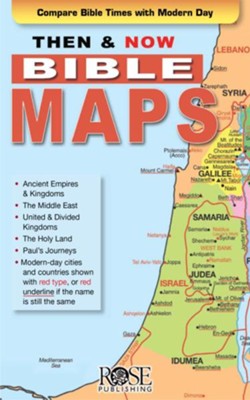 ▼▲
Compare Biblical Places with Today's Cities and Countries
What countries today occupy the Bible lands of 2,000+ years ago? Are the borders of Persia in Bible times the same as the borders of Iran today? The answers to these questions and many others are found in the Then - Now Bible Maps eBook. This fascinating reference tool contains seventeen Bible maps showing the locations of ancient cities and countries in comparison with modern-day cities and boundaries. What a great way to compare places in today's news with places in the Bible.

Then - Now Bible Maps makes it easy to see where Persia is today and the places Paul's first missionary journey would take him if traveling the same route today. Below are just a few of the maps included in this incredible resource:Then - Now Bible Maps eBook makes it easy to compare locations that are familiar in the Bible with modern day locations. On each of the seventeen maps, Bible places are shown in black type and modern-day cities and countries appear in red type. The maps also provide helpful historic information. For example:Then - Now Bible Maps is a fascinating resource that you will refer to again and again when you are studying the Bible.

▼▲
I'm the author/artist and I want to review Then and Now Bible Maps, Pamphlet - eBook.
Back
Back