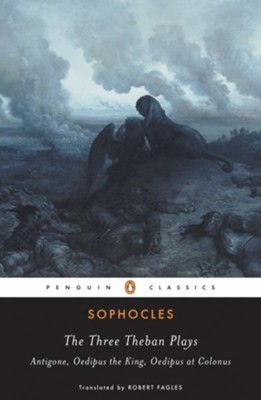 ▼▲
Oedipus' doomed life-trying to avoid the curse he's been cursed to bear-towers over Greek tragedy. Translated with lucidity and power, the riddles of Oedipus are potent as they ever were in this collection of Sophocles' works. Antigone, Oedipus the King and Oedipus at Colonus, as well as introductions and essays on the text and translation, are included. 430 pages, softcover.

▼▲
The heroic Greek dramas that have moved theatergoers and readers since the fifth century B.C.

Towering over the rest of Greek tragedy, the three plays that tell the story of the fated Theban royal family—Antigone, Oedipus the King and Oedipus at Colonus—are among the most enduring and timeless dramas ever written. Robert Fagles's authoritative and acclaimed translation conveys all of Sophocles's lucidity and power: the cut and thrust of his dialogue, his ironic edge, the surge and majesty of his choruses and, above all, the agonies and triumphs of his characters. This Penguin Classics edition features an introduction and notes by the renowned classicist Bernard Knox.

▼▲
Sophocles was born at Colonus, just outside Athens, in 496 BC, and lived ninety years. His long life spanned the rise and decline of the Athenian Empire; he was a friend of Pericles, and though not an active politician he held several public offices, both military and civil. The leader of a literary circle and friend of Herodotus, he was interested in poetic theory as well as practice, and he wrote a prose treatise On the Chorus. He seems to have been content to spend all his life at Athens, and is said to have refused several invitations to royal courts.Sophocles first won a prize for tragic drama in 468, defeating the veteran Aeschylus. He wrote over a hundred plays for the Athenian theater, and is said to have come first in twenty-four contests. Only seven of his tragedies are now extant, these being Ajax, Antigone, Oedipus the King, Women of Trachis, Electra, Philoctetes, and the posthumous Oedipus at Colonus. A substantial part of The Searches, a satyr play, was recovered from papyri in Egypt in modern times. Fragments of other plays remain, showing that he drew on a wide range of themes; he also introduced the innovation of a third actor in his tragedies. He died in 406 BC.

Robert Fagles (1933-2008) was Arthur W. Marks ’19 Professor of Comparative Literature, Emeritus, at Princeton University. He was the recipient of the 1997 PEN/Ralph Manheim Medal for Translation and a 1996 Award in Literature from the American Academy of Arts and Letters. His translations include Sophocles’s Three Theban Plays, Aeschylus’s Oresteia (nominated for a National Book Award), Homer’s Iliad (winner of the 1991 Harold Morton Landon Translation Award by The Academy of American Poets), Homer’s Odyssey, and Virgil's Aeneid.

Bernard Knox (1914-2010) was Director Emeritus of Harvard’s Center for Hellenic Studies in Washington, D.C. He taught at Yale University for many years. Among his numerous honors are awards from the National Institute of Arts and Letters and the National Endowment for the Humanities. His works include The Heroic Temper: Studies in Sophoclean Tragedy, Oedipus at Thebes: Sophocles’ Tragic Hero and His Time and Essays Ancient and Modern (awarded the 1989 PEN/Spielvogel-Diamonstein Award).

▼▲
I'm the author/artist and I want to review The Three Theban Plays: Antigone; Oedipus the King; Oedipus at Colonus - eBook.
Back
×
Back
×