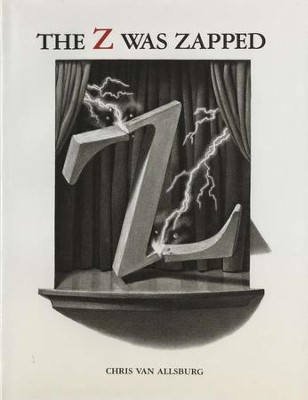 The Z Was Zapped

▼▲
A dramatic black-and-white presentation of the alphabet in which the two-time Caldecott Medalist depicts a mysterious transformation of each letter. Hardcover edition.

▼▲
A dramatic black- and- white presentation of the alphabet in which the three-time Caldecott medalist depicts a mysterious transformation of each letter.

Chris Van Allsburg is the winner of two Caldecott Medals, for Jumanji and The Polar Express, as well as the recipient of a Caldecott Honor Book for The Garden of Abdul Gasazi. The author and illustrator of numerous picture books for children, he has also been awarded the Regina Medal for lifetime achievement in children’s literature. In 1982, Jumanji was nominated for a National Book Award and in 1996, it was made into a popular feature film. Chris Van Allsburg is a former instructor at the Rhode Island School of Design. Visit him at chrisvanallsburg.com.

▼▲
Van Allsburg's latest is not an alphabet book but an ``alphabet theatre'': as its title page proclaims, it is ``a play in twenty-six acts, performed by the Caslon Players, written and directed by Mr. Chris Van Allsburg.'' In it, each letter of the alphabet is shown on a draped curtained stage, undergoing some sort of (usually ominous) transformation. Turning the page reveals the text that spells out the alphabetical event: the A was in an avalanche; the B was badly bitter; the C was cut to ribbons; and so on. This is an original and unusual undertaking, executed with both visual and verbal adroitness. In technique it most resembles Van Allsburg's The Mysteries of Harris Burdick; in both books, black pencil is used with remarkable skill to create the richness of texture and shading usually associated with full color. It is perhaps closest to Harris Burdick in ambition as well, in the sense that an imaginative challenge is presented to the reader (here, to come up with a verbal account of the pictured transformation before turning the page to find it). But the imaginative possibilities of the ``alphabet theatre'' are limited; this alphabet book format is more of an intriguing design element than a way to teach the ABCs. The picture and text that belong to a single letter are not on facing pages. While Van Allsburg's visual ingenuity is in full evidence (among his hauntingly realistic images are the evaporating E and the jittery J), there is both a sinister quality and an stagey dimension to the work. Artistically, a virtuoso performance, but one with an undeniably cold cast. All ages. (October)

▼▲
"The most succinctly nutty alphabet book in the history of mankind." The New York Times

"Whimsical, sophisticated, this should appeal to a wide audience, from those amused by mayhem in an unusual context to the many fans of this uniquely creative artist." Kirkus Reviews with Pointers

"Whimsical, sophisticated, this should appeal to a wide audience, from those amused by mayhem in an unusual context to the many fans of this uniquely creative artist."

▼▲
I'm the author/artist and I want to review The Z Was Zapped.
Back
×
Back
×