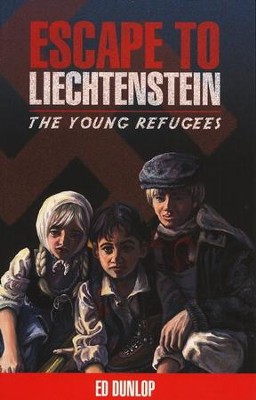 The Young Refugees #1: Escape to Liechtenstein

▼▲
Hans and Gretchen discover a young Jewish boy hiding from Nazi troops and decide to assist him in his escape from Austria. As a Jew in Nazi Germany, the life of young Jacob is cheap. But what he is smuggling is valuable beyond measure--to him, to his people, and to the enemy. To Gretchen, the Nazi can never be forgotten. They destroyed the most priceless relationship she had--and now she must fight for what she has left. Hans knows it is worth risking everything for the three of them to get over the border into Switzerland. But will that be enough? Recommended for ages 9 to 12.

▼▲
It is 1942; Adolf Hitler and his Nazi army ravage the Austrian countryside. Mama died during a bomb attack; Papa has been forced into the army of the Third Reich. Trusting God, thirteen-year-old Hans bravely seeks to care for his nine-year-old sister, Gretchen, who bitterly blames the Nazis for the death of their mother. Now, a platoon of brutal Nazi soldiers is searching their farm for a fugitive. After the soldiers leave, Hans and Gretchen find that fugitive, Jacob, a Jewish boy with a dangerous secret. Knowing that the Nazis will kill Jacob if they catch him, Hans and Gretchen decide to help him escape to Liechtenstein. Great dangers from nature and enemies beset the three. They must set aside childish thoughts, use mature judgment, be crafty as foxes. Friends turn out to be foes, while what seem like foes become friends. Only God can get them through to safety.
"Firmly reinforcing his Young Refugee novels with historical, geographical, technical, and mountaineering data, Ed Dunlop delivers gripping, suspenseful, worthwhile fiction. The straightforward plots, well garnished with surprising twists and mysteries, simple, evocative wording, and interesting characterization quickly capture the readers imagination. Christian thought and principals grow naturally within the plot and include, among other things: how hate warps the Christian; prejudice; trust and prayer in desperate situations; the influence of absent parents; the interplay of cowardice, fear, and heroism; witnessing about Christ; accepting Christ as Savior; facing ones own imminent death; and, witnessing both Christian and non-Christian death of both children and adults. Written for nine through twelve year olds The Young Refugees series will be useful for both individual and group reading in church, school, or family. Since these books give voice to many of the frightening questions that arise in todays children, The Young Refugees are valuable discussion starters." -- Donna Eggett, Christian Book Previews.com

Q: Is this book part of a series? ESCAPE TO LIEGHTCHENSTEN, THE YOUNG REFUGIES

▼▲
I'm the author/artist and I want to review The Young Refugees #1: Escape to Liechtenstein.
Back