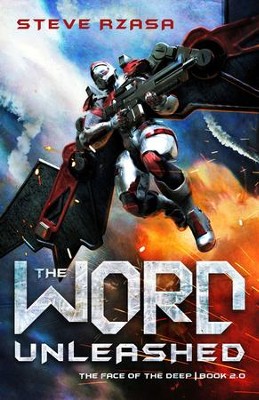 ▼▲
Come out, come out wherever you are.

Hiding from the secret police offers Baden time for reflection. Specifically, what has he learned about taking things that don't belong to him? Never again. Ever since he salvaged an outlawed book from a space wreck, life has been damage control.

He should just stop this game of cat and mouse, hand the Bible over to the authorities if they want it so bad. Except, he can't let go of it. And now that Baden's shared what he's read with believers who've been awaiting the book's return, he's realized unleashing the Word is not a matter of hide but seek.

Steve Rzasa is the author of seven novels, and was first published in 2009. They include three space operas and two steampunk tales through Enclave Publishing, and one sci-fi murder mystery with Castalia House. His debut novel, The Word Reclaimed, was a finalist for the American Christian Fiction Writers award for Best Speculative Fiction in 2010. His third novel, Broken Sight, won this award in 2012. His story In the Bag, set in the world of his steampunk novels Crosswind and Sandstorm, won the 2012 flash fiction contest for the Denver Chapter of ACFW.

Steve received his bachelor's degree in journalism from Boston University, and worked for eight years at newspapers in Maine and Wyoming. He's been a librarian since 2008, and received his Library Support Staff Certification from the American Library Association in 2014 - one of only 100 graduates nationwide and four in Wyoming. He is the technical services librarian in Buffalo, Wyoming, where he lives with his wife and two boys. Steve's a fan of all things science-fiction and superhero, and is also a student of history.

▼▲
I'm the author/artist and I want to review The Word Unleashed #2.
Back
Back