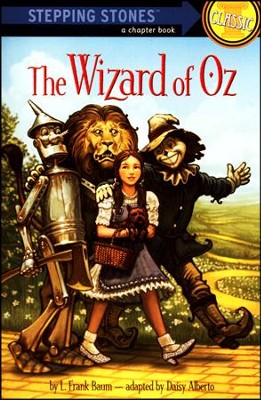 The Wizard of Oz

▼▲
Let your kids read this literary classic on their own! Adapted from the original, this Stepping Stones book is written in a simpler form with more familiar language for kids. Children will enjoy joining Dorothy and friends as they step right into Oz. Includes illustrations.

▼▲
L. FRANK BAUM  was born on May 15, 1856, in Chittenango, New York. He grew up on a country estate called 'Rose Lawn', his father having made a fortune. As an adult, he worked in the theatre, newspapers, and magazines, manufactured an axel grease, managed a general store, and raised chickens! In 1900, The Wonderful Wizard of Oz was published and became an overnight success. Two years later a musical of the book was produced on stage with Baum writing the lyrics.  Baum wrote 13 Oz books and nine other fantasies. More authors contributed to the Oz series, making a total of 40! The famous movie starring Judy Garland came out in 1939, 20 years after Baum's death in 1919.

W.W. DENSLOW was born in Philadelphia on May 5, 1856. By the time he turned twenty, he was working for magazines and newspapers all over the country. He moved to Chicago in the 1890s where he met L. Frank Baum. They worked on several books together, including The Wizard of Oz, but had disagreements over the rights. As a result, it is the only Oz book that Denslow illustrated. He went on to become one of the most well known and prolific American artists of the turn of the century. He died in 1915.

▼▲
I'm the author/artist and I want to review The Wizard of Oz.
Back
Back