Skip to main content
The Witness
By: Dee Henderson
Stock No: WW308124 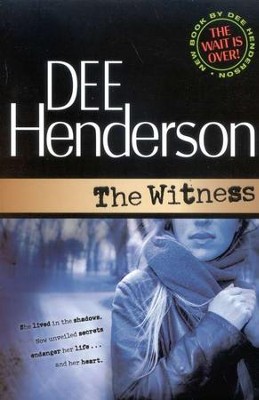 ▼▲
Eight years ago, Amanda Griffin witnessed a horrific crime, and she's been running ever since. Her sisters believe she's dead. But recently exposed family secrets have placed Amanda's siblings in the spotlight---and in peril. Can Amanda protect them without exposing herself? And does pressing danger mean police chief Luke Granger is running out of time? 375 pages, softcover from Tyndale.

▼▲
Police Chief Luke Granger's witness to a murder, Amy Griffin, has been on the run for years. Her family thinks she was murdered eight years ago, but Amy chose to accept a life in the shadows in order to protect her sisters' lives. Now unveiled secrets about their father have thrust the sisters into the public spotlight. The man who wants Amy dead now sees her sisters as the way to locate her. Luke and two of his homicide detectives are determined to stand in the way. They are each falling in love with a different sister, and it's become a personal mission to keep them safe. But chances are that at least one of them will fail, and facing the future will take a faith deeper than any of them currently knows.

▼▲
This latest romantic thriller from Henderson (the two series O'Malley and Uncommon Heroes) and her first with Tyndale House has the elements that have made her so popular in the inspirational Christian market: interesting characters, an intriguing plot and fast pacing. Amanda Griffin is deep in hiding, using various aliases to fly under the radar of nefarious criminal interests. When she witnesses a multiple murder, Deputy Chief of Police Luke Granger befriends her. He fails to convince Amanda to come out of hiding, however. Three years later, Amanda's story and that of two newly minted millionaire sisters come together, and Luke finds his interest in Amanda becoming more personal. There is a foreshadowing of tragedy, and Henderson isn't afraid to kill off a beloved character in the interest of a compelling plot. She does an admirable job dispensing just the right amount of information, and her penchant for resilient women characters is endearing. Yet despite mostly strong writing, her dialogue is sometimes stiff and a few plot segments strain credibility (e.g., Amanda working incognito at a jewelry store in her sisters' hometown). Better is the well-paced action, the romance, and Henderson's integration of faith themes. The conclusion tapers off, a major disappointing note in this otherwise engrossing stand-alone entertainment. (Feb.) Copyright 2006 Reed Business Information.

▼▲
For eight years, Amanda Griffin has been on the run from Richard Wise. She holds the access to twenty million dollars of ill-gotten funds, and a list of his contacts that shes gradually turning over to the police. One mistake could snuff out her life. Her family already thinks shes dead.

Trouble arrives when her sisters receive a huge inheritance from the father they never knew. Afraid that Wise will take revenge on Marie and Tracey, Amanda moves back to town to keep an eye on them -- and let them know shes still alive, for now.

Police Chief Luke Granger met Amanda three years ago, and he hasnt forgotten her. One of his homicide detectives is dating Tracey; another is just getting to know Marie. Luke, Marsh, and Connor will do everything in their power to keep the three Griffin women safe. But it may not be enough.

Dee Henderson departs from her usual pattern by focusing on three couples, making her protagonists older, and having the series more integrated; in fact, many of the story threads arent finished in this book. But the book has her signature blend of mystery and suspense. The characters are fully drawn, but Hendersons point-of-view choices prevent readers from connecting as deeply as those in her previous novels. Amanda and Tracey are never the viewpoint characters, and I think the book suffers because of it, especially with Amanda. Hopefully future books will allow readers to get to know her better. In all, The Witness is an excellent choice for romantic suspense fans. -- Katie Hart, Christian Book Previews.com

▼▲
I'm the author/artist and I want to review The Witness.
Back
Back