Skip to main content
The Watcher
By: Nikki Grimes
Illustrated By: Bryan Collier
Stock No: WW854452 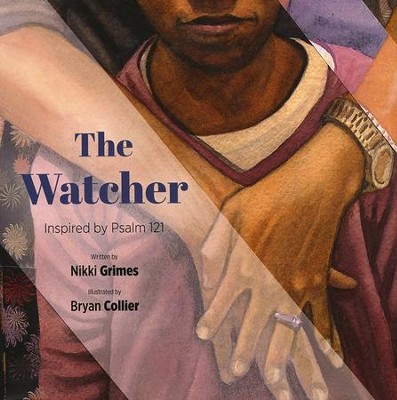 ▼▲
The Watcher by Nikki Grimes, and illustrated by Bryan Collier is a story inspired by Psalm 121 and is written in two ways: a story narrative and a poem within the lines of the story, called a golden shovel. A story about bullying, told from two different standpoints: the bully Tanya, and her usual victim Jordan. Jordan lives in fear of Tanya, unaware of the worries and troubles that Tanya bears alone. The Lord is watching over both of them and helps to guide them along a path that might just help them to understand each other and even forge a new friendship.

A poetic story inspired by Psalm 121

Jordan lives in fear of Tanya, the class bully. But Tanya has worries of her own, no matter how much she tries to ignore them. It seems impossible that Jordan and Tanya could be anything other than enemies, but the Lord is watching over them, guiding each of them along a path that might just help them to understand one another.

Nikki Grimes takes the words of a Psalm 121 and masterfully transforms them into a golden shovel poem of compassion, friendship, and faith. Coupled with powerful artwork from Bryan Collier, this heartfelt story is one that readers will treasure.

▼▲
Nikki Grimes is a New York Times bestselling author. Her previous works include At Jerusalem's Gate, When Daddy Prays (both Eerdmans), and Bronx Masquerade (Dial), which won the Coretta Scott King Award. Most recently, she won the 2017 Laura Ingalls Wilder Award for her lasting contributions to children's literature. Nikki lives in California. Visit her website at www.nikkigrimes.com.

Bryan Collier grew up in Maryland and began painting when he was fifteen. His first children's book, Uptown (Henry Holt), earned him the first-ever Ezra Jack Keats New Illustrator Award. He has also received four Caldecott Honors and has won the Coretta Scott King Award six times. He lives in New York with his wife and daughters. Visit his website at www.bryancollier.com.

▼▲
Kirkus Reviews (STARRED review)
"Wilder Award–winning author Grimes delivers a compact yet powerful message of hope and encouragement based on Psalm 121. . . . A sumptuous work filled with a deliciously wrapped center—perfect for classrooms, school, public, or church libraries, or home: wherever hearts go for mending."

Publishers Weekly (STARRED review)
"Drawing on Psalm 121 and a poetic technique called the Golden Shovel, Grimes creates a cycle of poems about two children, Jordan and Tanya, who become friends through their intense faith and the arrival of a new classmate. . . . The language, by turns soaring and searing, requires close attention, but its beauty is brought to earth in the best way by Collier’s resonant photo-collages."

Booklist (STARRED review)
"In short bursts of poetry, readers meet Jordan, who fears his tormentor, and Tanya, the bully, whose stuttering isolates her. . . . Readers will be moved by Tanya’s fears and Jordan’s ability to reach out. Collier uses his look-and-look-again collage work, here in earth tones, to capture and extend the emotions bubbling near the surface. Childhood concerns, some common, some not, are elevated by the infusion of God into this wholly (and holy) original mix."

▼▲
I'm the author/artist and I want to review The Watcher.
Back
Back