The Voyages of Doctor Dolittle - eBook
By: Hugh Lofting 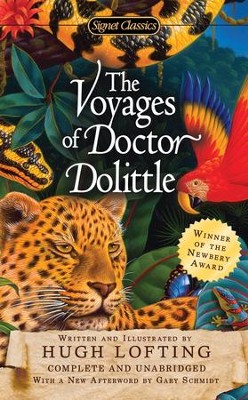 The Voyages of Doctor Dolittle - eBook

Doctor Dolittle heads for the high seas in perhaps the most amazing adventure ever experienced by man or animal! Told by 9-and-a-half-year-old Tommy Stubbins, crewman and future naturalist, Doctor Dolittle and company survive a perilous shipwreck and land on the mysterious, floating Spidermonkey Island. There he meets the Great Glass Sea Snail who holds the key to the biggest mystery of all.

▼▲
Hugh Lofting was born in 1886 in Maidenhead, Berkshire. His Doctor Dolittle books first appeared on paper in the form of letters to his children, Elizabeth and Colin. Lofting wrote a number of children's books besides the Dolittle series, including The Story of Mrs. Tubbs (1923), Tommy, Tilly and Mrs. Tubbs (1936), Porridge Poetry (1924), The Twilight of Magic (1930), and Gub Gub's Book (1932). Lofting also wrote one book for adults, Victory for the Slain (1942). He died in 1947 in Santa Monica, California.

Jerry Griswold is a specialist in children’s literature and American culture. He is the award-winning author of seven books, including Feeling Like a Kid, The Meanings of "Beauty and the Beast," and The Classic American Children’s Story. Griswold has published over 200 essays in The Paris Review, The Nation, New Republic and elsewhere. He frequently contributes to the New York Times Book Review and the Los Angeles Times. Griswold is an Emeritus Professor of Comparative Literature at San Diego State University, and has been a visiting professor at UCLA, UCSD, and the National University of Ireland. He has lectured all over the world.

Gary Schmidt is an award-winning children's book author. He received a Newbery Honor and a Printz Honor for his young adult novel Lizzie Bright and the Buckminster Boy, as well as a Newbery Honor for The Wednesday Wars. He is a professor of English at Calvin College in Grand Rapids, Michigan.

▼▲
I'm the author/artist and I want to review The Voyages of Doctor Dolittle - eBook.
Back
×
Back
×