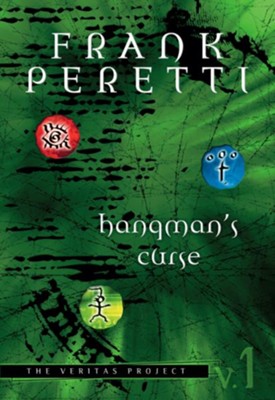 ▼▲
Elijah and Elisha are teenage twins who, along with their parents, have been secretly commissioned by the President to investigate strange mysteries, crimes and unusual occurrences. They're the Veritas Project, and their job is to find out not only what happened, but why - the veritas (Latin word for truth) behind today's hottest issues.

Their new assignment is The Hangman's Curse. In Baker, Washington, three popular student athletes lie incoherent, with loss of muscle coordination, severe paranoia and hallucinations. It's whispered that they are victims of Abel Frye, a ghost that's haunted the school since a student hanged himself there in the 1930's. Now the hangman's curse is spreading and the students are running scared.

They could be anyone, anywhere . . . even the person walking by you right now.

The Veritas Project is their code name—but only a handful of people know teens Elijah and Elisha Springfield have been covertly commissioned by the President to investigate strange mysteries that delve into the paranormal and supernatural. Their charge is to find out not only what happened, but why—the veritas (Latin for truth) behind the seemingly impossible phenomena.

In Baker, Washington, three popular student athletes lie in an incoherent coma, with loss of muscle coordination, severe paranoia, and hallucinations. It's whispered that they're victims of Abel Frye—a curse that's haunted the school since a student died there in the 1930s. Now the curse is spreading, and students are running scared. The Veritas Project must go undercover to find the truth . . . before it's too late.

Frank E. Peretti is one of American Christianity's best-known authors. His novels have sold over 10 million copies, and he is widely credited with reinventing Christian fiction. He and his wife, Barbara, live in the Pacific Northwest. www.frankperetti.com.

▼▲
I'm the author/artist and I want to review The Veritas Project: Hangman's Curse - eBook.
Back
Back