Skip to main content
The Undoing of Saint Silvanus, Softcover
By: Beth Moore
Stock No: WW416484 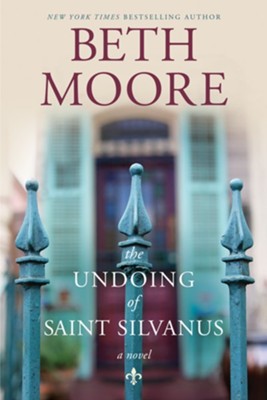 The Undoing of Saint Silvanus, Softcover

The Undoing of Saint Silvanus is the first fiction book by the well-known American evangelist author Beth Moore.

Located in New Orléans, Saint Silvanus was originally built during the 1800s as a church and was later converted to an apartment complex now run by Jillian's estranged grandmother. While in town attending her father's funeral, she meets an eclectic group of tenants from the building. As strange things begin happening, she finds out her father was actually murdered. When relics from the building appear in new places, she considers that the building could be cursed. Now she can't leave until she finds out what is really going on.


Only God knew why Jillian Slater agreed to return to New Orleans on the news that her father had finally drunk himself to death. It’s not like they were close. She hadn’t seen him—or her grandmother, the ice queen—in almost 20 years. But when Adella Atwater, the manager of her grandmother’s apartment house, called and said Jillian’s expenses would be paid if she’d fly in for the burial, a free trip to New Orleans was too intriguing to resist.

What Adella didn’t tell her was that the apartment house wasn’t a house at all and, whatever it was, bore the dead weight of a long and painful history. As soon as Jillian meets the odd assortment of renters and realizes that her grandmother had no idea she was coming, she hatches a plan to escape. But the investigation into her father’s death quickly unfolds and Jillian is drawn into the lives of the colorful collection of saints and sinners who pass through Saint Silvanus. She soon discovers there is more at stake than she ever imagined. Who is behind the baffling messages and the strange relics left on the steps? Is it possible that her family is actually cursed? Or is it just this crazy old house that holds them all under its spell?

Jillian walks into a web of spiritual and personal danger borne out of her family’s broken history, and despite Adella’s wiliest efforts, only God himself can orchestrate the undoing of all that is going on at Saint Silvanus.

▼▲
In her anticipated fiction debut, The Undoing of Saint Silvanus, Beth Moore weaves an introspective, genre-bending narrative. Moore, a popular author of Christian nonfiction and founder of Living Proof Ministries, tells the story of Jillian Slater, who travels to New Orleans after receiving news of her alcoholic father’s death. . . . . Though it’s a fast-paced story, The Undoing of Saint Silvanus also contains moments of introspection—both for Jillian and for the reader—that are among its strongest scenes. Moore’s vivid and often delightful descriptions of New Orleans, Saint Silvanus and the multiple supporting characters add a lively sense of place. The gripping mystery will keep readers engaged till the end, where Jillian finds both answers and a new relationship with God.
Learning that her estranged father has been murdered, Jillian Slater travels to post–Hurricane Katrina New Orleans and receives a glacial welcome from her grandmother Olivia. What starts as an awkward and unwanted visit on both sides turns into a journey of discovery for Jillian and the emotionally distant Olivia. As Jillian delves into her family’s past, which revolves around their apartment house, the Saint Silvanus, a series of sinister events endangers her fledgling relationship with her grandmother. Someone wants revenge on her family, but they will gladly take it out on Jillian instead. Strong female protagonists dominate this novel, and memorable supporting characters provide levity and depth. The secondary story line of the origins of the curse on Saint Silvanus is overshadowed by the present-day portrayal of its residents. Verdict: Making her fiction debut, best-selling inspirational author Moore (Audacious; Breaking Free) delivers an absorbing, suspenseful read. Readers who prefer a story focused on finding faith through adversity will savor this beautifully written novel.
Moore’s debut novel is certain to draw myriad readers familiar with her bestselling Bible studies (The Law of Love) and faith-based leadership guides and self-help books (So Long, Insecurity). Those who love her down-home Southern style will be pleased to find it in this tale set in New Orleans, where a former church is now an apartment building named Saint Silvanus, often referred to as Saint Sans. Olivia Fontaine faces the death of her only child, Raphael, with her usual iciness, but her reserve cracks when police discover Rafe was killed. Olivia’s granddaughter comes to attend her father’s funeral . Readers will come to love Saint Sans building manager Adella Atwater and the residents, as well as the NOPD cops who solve Rafe’s murder. The novel is not without flaws . . . but it remains endearing and entertaining to the end. Moore’s many fans will no doubt flock to her first work of fiction
When the mysterious death of Jillian Slater’s estranged father is deemed a possible murder, she heads to New Orleans in search of answers. She also needs to see her frosty grandmother, who owns a church building with a painful history. Saint Silvanus is now home to a hodgepodge of apartment residents and the ever- faithful apartment manager, Adella Atwater. As the murder case unfolds, strange objects begin appearing on the steps of Saint Silvanus, throwing the precarious household out of balance to the point that only a higher power can see them through a storm of suspicion, deceit, and absolution. In her fiction debut, beloved Christian speaker and author Moore dives into uncharted territory with gusto. Simultaneously heartwarming and chilling, this tale has wide appeal with its mix of mystery, evangelism, history, suspense, and love. Moore brings southern culture to life, and thoughtfully poses questions of belonging, sin, and self-worth. From its gritty start to its redemptive finish, Moore’s ambitious first novel spotlights her gifts for humanizing the biblical experience and the search for faith.
Well known Bible teacher Moore blasts into the world of fiction with a page-turner that is personal, emotional, and spiritual. Enter the doors of an old church-turned-apartment house in New Orleans, a building with a dark presence since its formation. Jillian, the owner’s estranged granddaughter, reluctantly stays there after her homeless father is discovered murdered. This California girls gets immersed in the foreign world of the Deep South, surrounded by strangers, and simultaneously becomes the next target in the murderer’s vengeful plot. Each intrinsically written character adds much to the story, but Jesus is the ultimate hero. Murders, broken families, bitterness, abortion, and occultism all are a part of this story, but God redeems it all. Told through a woman’s lens and primarily for a female audience, this story beautifully illustrates God’s power and desire to crush strongholds and evil in all His children’s lives.

▼▲
I'm the author/artist and I want to review The Undoing of Saint Silvanus, Softcover.
Back
×
Back
×