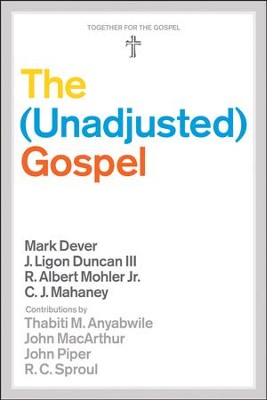 ▼▲
Responding to the perennial temptation to "tame" the message about Jesus, eight prominent church leaders, including John Piper, John MacArthur, Al Mohler, and R. C. Sproul, challenge Christians to hold fast to the faith by emphasizing the importance of maintaining a pure and unadulterated view of the gospel.

Looking back at the New Testament and the church fathers and forward to the church's continued mission of faithful biblical preaching and effective cultural engagement, the contributors draw on their extensive ministry experience to offer us a thoughtful plea for safeguarding the message of the gospel in the midst of our pluralistic world.

With contributions from John MacArthur, John Piper, R. C. Sproul, and more, this book highlights the importance of holding fast to a pure and unadulterated gospel, in both preaching and cultural engagement.

Mark Dever (PhD, Cambridge University) is the senior pastor of Capitol Hill Baptist Church in Washington, DC, and president of 9Marks (9Marks.org). Dever has authored over a dozen books and speaks at conferences nationwide.

▼▲
I'm the author/artist and I want to review The (Unadjusted) Gospel.
Back
×
Back
×