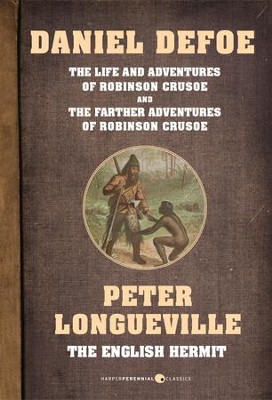 This special collection brings together Daniel Defoe’s two adventure-filled novels about the now famous character, Robinson Crusoe, and Peter Longueville’s castaway story, The English Hermit. In The Life and Adventures of Robinson Crusoe, the titular character finds himself the sole survivor of a shipwreck and is marooned on an island, along with an escaped prisoner he names “Friday,” for twenty-seven years. After dangerous encounters, the pair is rescued and returns home to England. But Crusoe cannot forget the island where he spent most of his life, and vows to return in The Farther Adventures of Robinson Crusoe. In The English Hermit, while searching for fresh food on a seemingly uninhabited island, Edward Dorrington and his crew stumble upon a meticulously crafted village.

English author Daniel Defoe was at times a trader, political activist, criminal, spy and writer, and is considered to be one of England’s first journalists. A prolific writer, Defoe is known to have used at least 198 pen names over the course of a career in which he produced more than five hundred written works. Defoe is best-known for his novels detailing the adventures of the castaway Robinson Crusoe, which helped establish and popularize the novel in eighteenth century England. In addition to Robinson Crusoe, Defoe penned other famous works including Captain Singleton, A Journal of the Plague Year, Captain Jack, Moll Flanders and Roxana. Defoe died in 1731.

Little is known about author Peter Longueville. His only literary contribution, The English Hermit: or the unparalleled sufferings, and surprising adventures of Phillip Quarll, was originally published in 1727. Some early editions announced the fictitious narrator of the novel, Edward Dorrington, as the author, presumably to increase popularity and lend realism to Longeuville’s story while other sources alternately credit Alexander Bicknell, who may have been a translator or editor of the work, as a co-author.

▼▲
I'm the author/artist and I want to review The Ultimate Robinson Crusoe Bundle - eBook.
Back
Back