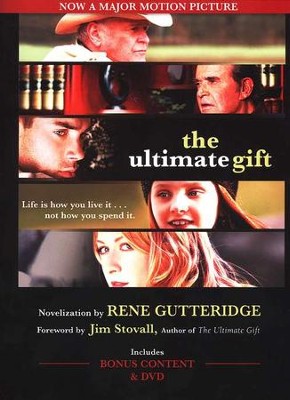 ▼▲
Spoiled Jason Stevens expects to inherit millions when his wealthy grandfather dies. Instead, the will requires him to complete 12 monthly tasks before he touches a dime. Can he rise to meet this beyond-the-grave challenge? Follow Jason on a yearlong journey that leads him to the last thing he ever expected! Includes a DVD of the movie trailer. 272 pages, softcover from WestBow.

Jason Stephens lives a life of wealth. A life of privilege. A life that's about to take a radical turn. Jason always had a straightforward relationship with his billionaire grandfather, Howard "Red" Stevens. He shunned him but welcomed his money. So he figured when Red died, his part of the inheritance would be a simple cash transaction that would fund his extravagant lifestyle.

Instead, for Jason to receive his inheritance, he's given an ultimatum...a series of twleve tests or "gifts" as Red calls them. If he fails at any one of them, he loses everything. If he completes them all, the ultimate gift will be his.

One of those "gifts" involves finding a friend...something Jason has never experienced before. Yet this unlikely friendship and an unexpected romance may just open his eyes to what he's been missing all along.

"You don't begin to live until you've lost everything."

▼▲
I'm the author/artist and I want to review The Ultimate Gift.
Back
Back