Skip to main content
CYBER MONDAY IS HERE! Shop savings up to 88%. >
The Twelfth Imam, The Twelfth Imam Series #1
By: Joel C. Rosenberg
Stock No: WW311647 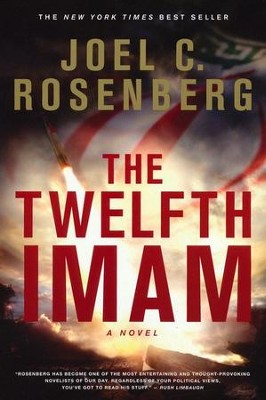 ▼▲
CIA operative David Shirazi's mission is to disrupt Iran's nuclear weapons program---without triggering a war. But when an obscure religious cleric is suddenly hailed as the Islamic messiah, Iran's military prepares to strike Israel. Can David save the world---even as a dark secret from his past threatens to change his life forever?

▼▲
Book 1 in the best-selling 3-book espionage and spy thriller series that has sold 700,000 copies!

The Twelfth Imam is the first novel of a new political thriller series by Joel C. Rosenberg, the New York Times bestselling author of the award-winning Last Jihad series. Rosenberg takes you inside a world few will ever enter. Hold on to your seat—the twists and turns never stop coming.

Tensions are rising in the Middle East. Iran’s president vows to annihilate the United States and Israel. Israel’s prime minister says someone must hit Iran’s nuclear sites “before it’s too late.” The American president warns against a preemptive strike on Iran’s nuclear facilities and says negotiations are the key to finding peace.

And amid it all, rumors are swirling throughout the region of a mysterious religious cleric claiming to be the Islamic messiah known as the Mahdi or the Twelfth Imam. Word of his miracles, healings, signs, and wonders is spreading like wildfire.

CIA operative David Shirazi was born for this moment. He is recruited and sent into Tehran with one objective: use all means necessary to disrupt Iran’s nuclear weapons program, without leaving American fingerprints and without triggering an apocalyptic new war.

A native Farsi speaker whose family escaped from Iran in 1979, he couldn’t be better prepared for the mission. But none of his training has prepared Shirazi for what will happen next.

▼▲
The Twelfth Imam by Joel Rosenberg flawlessly combines the best elements of a Tom Clancy political thriller with the spiritual warfare of Left Behind. Set in modern Iran, the book follows a wide cast ranging from Iranian Christians and CIA operatives to radical Muslims and Iranian nuclear scientists. Readers find themselves guessing at every turn, trying to unravel an intricate web of deception, alliances, and hidden agendas as the Iranian government works feverishly to develop weapons of mass destruction. Rosenberg has outdone himself with this novel. The action-packed plot sprints forward from the opening paragraph, and loses none of its intense drama and emotion as it continues. The book focuses primarily on David Shirazi, a Muslim-turned-agnostic who hunts terrorist leaders for the CIA. Undercover in Iran, he finds himself struggling to outwit and outgun a host of Iranian loyalists. Creating antagonists is where Rosenberg shines the most. He explores their motivations perfectly, showing an alien, distinctly Islamic culture while engaging the readers sympathy. As the nuclear tension rises, the longing to see these characters safe and forgiven grows almost unbearable. Even while crafting a realistic threat of annihilation, Rosenberg manages to keep the spiritual lives of his characters paramount.

Rather than rely solely upon imagination, Rosenberg brings elements of the real world into the plot. The frequent, factual prayers and references by Iranian leaders to the titular Twelfth Imam grow throughout the book from an interesting rumor into a thought-provoking reality. What would happen if this Islamic messiah actually appeared? Rosenberg is true to Jesus promise in Matthew 24:5 that many will come in my name, claiming, 'I am the Christ,' and will deceive many. Yet, opposite this, there are additional reality-based themes including the massive, underground revival of the Iranian church. This sets off a chain of events that makes this novel as much a spiritual thriller as a political one. Characters race to discover the exact nature of the religious and militaristic threats facing them. The books climactic finale answers just enough questions to leave the reader satisfied, yet inwardly starving for the future books in the series.

The diverse characters in this novel cannot be justly summarized in only a few sentences. Individual lives are not perfect; rather, they experience all the physical, mental, and spiritual agonies of tragic lives. Nor is there any delusion that conversion will prevent pain. Their suffering is intense, deeply personal, and cuts sharply to the heart of the reader in unparalleled fashion. While Christian virtues are often ignored, there is a profound sadness when they are, as if the reader were experiencing the mind of Christ. Equally, there is an unparalleled lifting of the spirit when characters are moved by Jesus example.

The Twelfth Imam well deserves praise. Like Joel Rosenbergs other novels, it reads like a narrative account of current events and is as educational as a nonfiction book. While it is moderately violent and contains a brief, suggestive scene, these elements are not graphic or distracting. For fans of thrillers, politics, current events, religion, or even novels in general, The Twelfth Imam cannot be missed!  Ryan Dennison, www.ChristianBookPreviews.com