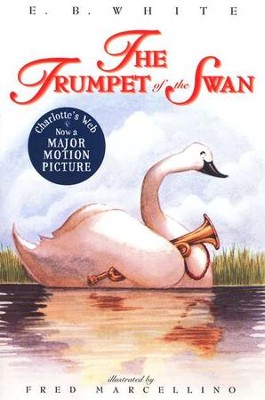 The Trumpet of the Swan

▼▲
Luois is a Trumpeter Swan who came Into the world lacking a voice. When his father explained to him that he was different from other cygnets, Louis felt scared. His father, however, promised to help. Sam Beaver, a boy who loved all wild things, took Louis to school, where he learned to read and write. This was a help, but it did not solve his major problem: he was in love with the beautiful swan, Serena, and she spurned him because he was defective. And that was when Louis's father, the old cob, did a difficult thing - he put honor aside and stole a trumpet so his son would be able to woo his love. Louis's determination to become a trumpeter and pay off his father's debt takes him far from the wilderness he loves. But he succeeds and wins the swan of his desiring.Recommended for ages 8 to 12.

Fred Marcellino's picture books include Puss in Boots, a Caldecott Honor Book; The Steadfast Tin Soldier, an ALA Booklist Children's Editors' Choice; and The Pelican Chorus, one of School Library Journal's Best Books of the Year.

His most recent books, The Story of Little Babaji and Ouch! are both ALA Notable Children's Books.

Dancing By the Light of the Moon: The Art of Fred Marcellino will open on November 9, 2002 and run through January 26, 2003 at The Norman Rockwell Museum in Stockbridge, Massachusetts. This is a comprehensive show of more than 150 pieces highlighting his children's book career, and the first museum retrospective honoring the artistic accomplishments of this remarkable artist. For more information visit, The Norman Rockwell Museum website.

▼▲
I'm the author/artist and I want to review The Trumpet of the Swan.
Back
Back