The Tortoise & the Hare
By: Jerry Pinkney 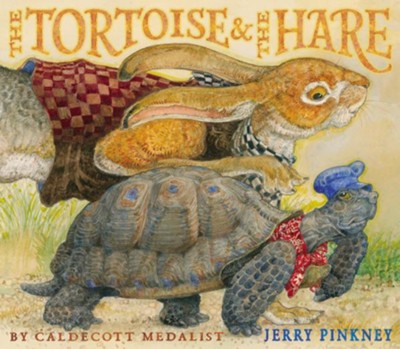 The Tortoise & the Hare

▼▲
This lavish, highly-acclaimed rendition of Aesop's most beloved fable about grit, hope, and resilience is brought to life by Caldecott Medal-winning artist Jerry Pinkney.
This nearly wordless companion to the Caldecott Medal-winning The Lion & the Mouse is Jerry Pinkney's most stunning masterpiece yet. Even the slowest tortoise can defeat the quickest hare, and even the proudest hare can learn a timeless lesson from the most humble tortoise: Slow and steady wins the race! Here is a superbly rendered journey from starting line to finish that embodies the bravery, perseverance, and humility we can all find inside ourselves.
Don't miss these other classic retellings by Jerry Pinkney:
The Lion & the Mouse
The Grasshopper & the Ants
The Three Billy Goats Gruff
Little Red Riding Hood

▼▲
Jerry Pinkney is one of the most heralded children's book illustrators of all time. He has the rare distinction of being the recipient of five Caldecott Honors and the winner of the 2010 Caldecott medal for The Lion and the Mouse, and has since created two companion picture books: The Tortoise & the Hare and The Grasshopper & the Ants. He has won the Coretta Scott King Award five times, the Coretta Scott King Honor four times, and has been nominated for the prestigious Hans Christian Anderson Award. He was also the first children's book illustrator elected to the American Academy of Arts and Sciences. He lives with his wife, author Gloria Jean Pinkney, in Croton-on-Hudson, New York. The artist invites you to visit his website at jerrypinkneystudio.com.

* "[There is] a note of homespun vibrancy to Pinkney's elegant watercolor paintings....The tortoise may have won the race, but the real winner here is the listening and viewing audience."—Booklist, starred review
* "Pinkney's magnificently illustrated version of this famous fable gives the race the excitement of an Olympic event."—Publishers Weekly, starred review
* "Will engross readers....A captivating winner--start to finish!"—Kirkus Reviews, starred review
* "The limited text, used sparingly but extremely effectively, reinforces the theme of the story--that the journey is as important as the ultimate goal.... This spectacular success is certain to become a classic in its own right."—School Library Journal, starred review
* "Pinkney has again created a tour de force."—Library Media Connection, starred review
* "The anthropomorphism blends seamlessly with the naturalistic detail.... A lively and imaginative take."—The Bulletin, starred review
"A worthy follow-up....The richly detailed illustrations are lively and humorous, but what makes this retelling particularly ingenious is Pinkney's use of the oft-quoted moral....slow and steady wins the race!"—The Horn Book

▼▲
I'm the author/artist and I want to review The Tortoise & the Hare.
Back
×