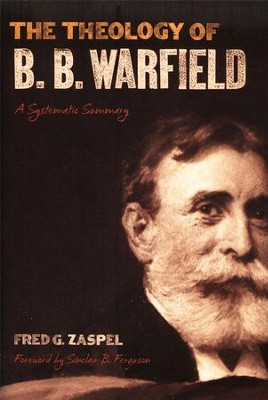 The Theology of B.B. Warfield: A Systematic Summary

▼▲
Benjamin Breckinridge Warfield (1851-1921) was undoubtedly one of the greatest Reformed theologians in the history of America. As professor of didactic and polemic theology at Princeton University, he wrote extensively in defense of fundamental Christian doctrines.

While his writing touched on the full spectrum of theological topics, it was spread over hundreds of periodicals, books, and pamphlets, and a significant portion has never been published in an accessible form. Warfield stands as a dominant figure on the theological landscape, but few have a comprehensive grasp of his theology, largely because of the difficulty of tracing his ideas through numerous sources.

Fred G. Zaspel has spent many years studying Warfield's published and unpublished writing, and presents here a concise and coherent systematic theology per B. B. Warfield. For the first time ever, readers can, in one volume, access the content of this great theologian's academic, sermonic, and devotional works. Scholars, pastors, and students will profit from the unique combination of comprehensive detail and devotional warmth in this systematic theology.

The first comprehensive, systematic treatment of B. B. Warfield’s theology gives scholars, pastors, and students a concise account of Warfield’s position on all theological topics.

Fred G. Zaspel (PhD, Free University of Amsterdam) serves as the pastor at Reformed Baptist Church in Franconia, Pennsylvania, an adjunct professor of systematic theology at the Southern Baptist Theological Seminary, and the executive director of Books At a Glance. He is the coauthor of New Covenant Theology and has published numerous booklets, articles, and book reviews.

Sinclair B. Ferguson (PhD, University of Aberdeen) is Chancellor’s Professor of Systematic Theology at Reformed Theological Seminary and the former senior minister of the First Presbyterian Church in Columbia, South Carolina. He is the author of several books, the most recent being By Grace Alone: How the Grace of God Amazes Me. Sinclair and his wife, Dorothy, have four grown children.

▼▲
Serious Christians who have dipped into Warfield find his writings to be a wholly admirable mix of rigorous exegesis, mature theological synthesis, and frank devotion to Christ. Much of his work is known only to specialists, not least because when Warfield first published it, it was scattered over many journals and books. Indeed, a fair bit of it was never published. Zaspels Warfield remedies the problem admirably: one hopes and prays that it will entice a new generation of readers to delve deeply into Warfields contributions.
-D. A. Carson,
Research Professor of New Testament, Trinity Evangelical Divinity School

B. B. Warfields distinguished achievements as a systematic theologian have been obscured by the episodic, ad hoc publication of his major theological statements. But even if Warfield did not think it necessary that he write a single, connected systematic theology, it is nonetheless most welcome that Fred Zaspel has done the job for him! The result is a very useful compendium that gives both admirers and detractors of Warfield a full and coherent account of his theology. All who are in the least interested in Warfield or who care at all about vigorous Calvinist theology will find this a most valuable book.
-Mark A. Noll,
Francis A. McAnaney Professor of History, University of Notre Dame

B. B. Warfield does not need an introduction for evangelical Christians. He is well known as a major conservative theologian at the close of the nineteenth and the beginning of the twentieth centuries. His scholarship in biblical, historical, and doctrinal fields was often without a match. As a Professor in Didactic and Polemic Theology in Princeton Theological Seminary, he was content to use the three volumes of Charles Hodges Systematic Theology as the textbook and to pour out the fruits of his labor in a flow of searching articles in a number of theological reviews. Many of these have been republished in book form, but they have not been systematically arranged in one text. That is what Dr. Zaspel has done in culling from the great mass of Warfields writings his actual statements in the order they could have followed had Warfield written a one-volume Reformed theology. In this form Warfield may enjoy a renewed effectiveness for our age. With great enthusiasm I highly recommend this volume and hope it will receive a wide reception.
-Roger Nicole,
ETS Co-founder and its Seventh President

B. B. Warfield was without doubt the greatest of the theological minds of Old Princeton, and he remains a towering influence within both his own confessional Presbyterian tradition and wider conservative evangelicalism. Nevertheless, while his writings are still in print, clearly written, and very accessible, their occasional nature means that there is no convenient way of gaining from them a good grasp of the overall shape of his theology. Until now, that is. In this volume, pastor-theologian and passionate Warfield aficionado Fred Zaspel has produced a work of historical and theological synthesis that sets Warfields thought in context and offers a comprehensive account of his thought on the major loci of theology and the controverted points of his day. In this, Fred has left us allthe veteran Warfield fan and the neophytedeeply in his debt.
-Carl R. Trueman,
Academic Dean and Vice President, Westminster Theological Seminary

Well before the trans-denominational convergence of what we now call the evangelical church, B. B. Warfield spent forty years as the Presbyterian Horatius, holding the bridge that leads into the citadel of the Westminster Standards against those he saw as spoilers from the wastelands of liberalism. A heavyweight academic and a complete player in the fields of systematic, exegetical, historical, and polemical theology, he scattered his wisdom in hundreds of articles, which this book surveys and integrates with great skill. Warfield can now be seen in his full stature as the godly giant that he was, thanks to Fred Zaspels labor of love. Best thanks, and hallelujah!
-J. I. Packer,
Professor of Theology, Regent College; author, Knowing God

This work is long overdue. That a theologian of the stature of B.B. Warfield should not have had a comprehensive overview of his entire corpus such as this one by Dr Zaspel says far more about the thinking of Evangelicals and the ranks of the Reformed in the twentieth century than it does about Warfield. This truly excellent and eminently readable work will serve both as a primer to Warfield's thought as well as an outline of the systematic theology he never wrote. Highly recommended.
-Michael A. G. Haykin,
Professor of Church History and Biblical Spirituality, The Southern Baptist Theological Seminary; Director, The Andrew Fuller Center for Baptist Studies

B. B. Warfield was the last towering figure in a long line of Old School Presbyterian intellectuals known for their unshakable faith in the truth of Scripture and their practical, experiential Calvinism. That strain of scholarly conviction had a long history in New England, especially in Princeton. Its seeds were planted by New Englands earliest Puritan ministersmen such as John Cotton and Richard Mather. It gained widespread influence (and set down roots in the soil of Princeton) under the ministry of Jonathan Edwards. It gave birth to Princeton Theological Seminary under the leadership of Archibald Alexander. Charles and A. A. Hodge carried on the legacy at Princeton Seminary, and when the younger Hodge died in 1886, B. B. Warfield became that institutions fourth Principal. He also was its last great conservative theologian. Both profound and prolific, Warfield produced an invaluable body of theological and polemical writings that remain immensely influentialbecause the issues Warfield contended with are virtually the same issues that trouble the church today.

Fred Zaspels work is the first detailed, readable digest of Warfields theology, and it is an immensely helpful volume. Dr. Zaspel puts Warfields published writings in clear perspective against the theological issues that dominated that era. He also shows how those same issuesand Warfields clear and persuasive teachingremain relevant to us today. Dr. Zaspel writes with such clarity and simplicity that this volume will be a valuable help and encouragement to lay people and serious theologians as wella highly recommended addition to anyones library.
-John MacArthur,
Pastor, Grace Community Church, Sun Valley, California

The great B. B. Warfield was essentially an occasional writer. His works are largely made up of learned articles, encyclopedia entries, and popular journalism. Fred Zaspel had the great idea of rendering this vast body of material into a compendium, a Warfield systematic theology. He clearly has what it takes to do the job superbly well: a love for his subject, care and attention to detail, and, above all, a thorough knowledge of Warfields writing. The result is a book that does not replace the Warfield volumes, but provides an accurate, thematic entry into them. It will be of inestimable benefit to all students of this outstanding Reformed theologian. Well done! -Paul Helm , Teaching Fellow, Regent College; author, Faith with Reason The Lion of Old Princeton roars and purrs in this helpful survey. The author finely displays the passion and wit as well as intellectual credibility of Warfields remarkable work.
-Michael S. Horton,
J. Gresham Machen Professor of Systematic Theology and Apologetics, Westminster Seminary California

▼▲
I'm the author/artist and I want to review The Theology of B.B. Warfield: A Systematic Summary.
Back
Back