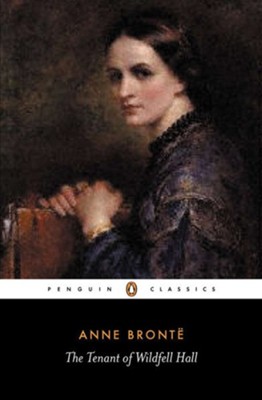 The Tenant of Wildfell Hall

▼▲
Unfairly judged by her sisters and critics, Anne Bronte had a singular vision of women's rights that extended beyond the "rights" given in her own time.

Divided into a unique three-part style, we learn of Helen Huntington's life via Gilbert Markham's letters--and in the middle, her own diary, which he transcribes faithfully. Escaping the corrupting influence of her husband (whom she admits it was a mistake to marry), Helen flees for the sake of her son Arthur, carrying him away to the remote Wildfell Hall. With a strong sense of her religious convictions and duty, Helen revolts against the idea that men may go off and have affairs, get drunk,--in short, "be a man"--whilst she and her son suffer the consequences of such heathen behavior. 535 pages, softcover, with an introduction and notes.

▼▲
A powerful depiction of a woman's fight for domestic independence and creative freedom, from the youngest of the Bront&euml; sisters

Gilbert Markham is deeply intrigued by Helen Graham, a beautiful and secretive young woman who has moved into nearby Wildfell Hall with her young son. He is quick to offer Helen his friendship, but when her reclusive behaviour becomes the subject of local gossip and speculation, Gilbert begins to wonder whether his trust in her has been misplaced. It is only when she allows Gilbert to read her diary that the truth is revealed and the shocking details of the disastrous marriage she has left behind emerge. Told with great immediacy, combined with wit and irony, The Tenant of Wildfell Hall is a powerful depiction of a woman's fight for domestic independence and creative freedom.

This Penguin Classics edition of Anne Bront&euml;'s The Tenant of Wildfell Hall, her groundbreaking study of a woman's valiant struggle for independence from an abusive husband, is edited with an introduction and notes by Stevie Davis. In her introduction Davies discusses The Tenant of Wildfell Hall as feminist testament, inspired by Anne Bront&euml;'s experiences as a governess and by the death of her brother Branwell Bront&euml;, and examines the novel's language, biblical references and narrative styles.

▼▲
Anne Bront&euml; (1820-1849), youngest of the Bronte sisters, was born at Thornton, West Yorkshire. Her father was a curate, and her mother died when she was a baby, leaving five daughters and one son. After the death of her sisters Maria and Elizabeth from tuberculosis in 1825, the Bront&euml; children were homeschooled, and together they created fantasy worlds and kingdoms which they explored in writing. Anne worked as a governess between 1840 and 1845, after which she published Agnes Grey (1847) and The Tenant of Wildfell Hall (1848) under the pen-name Acton Bell. Anne Bront&euml; died in 1849.

▼▲
I'm the author/artist and I want to review The Tenant of Wildfell Hall.
Back
Back