Skip to main content
CYBER WEEK SALE! Spot great deals up to 88% off. >
The Tears of Dark Water - eBook
By: Corban Addison
Stock No: WW76675EB 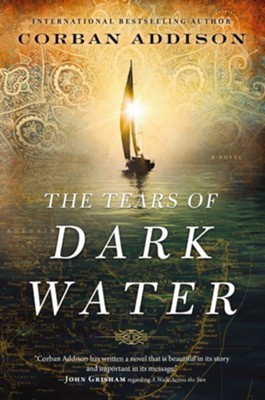 The Tears of Dark Water - eBook

A sailing trip meant to save a family in crisis. A nightmare hostage situation with modern-day pirates. And an FBI negotiator faced with memories of his own family tragedy.

Daniel and Vanessa Parker are an American success story. He is a Washington, DC, power broker, and she is a physician with a thriving practice. But behind the gilded fa&ccedil;ade, their marriage is in shambles, and their teenage son, Quentin, is self-destructing. In desperation, Daniel dusts off a long-delayed dream—a sailing trip around the world. Little does he know, the voyage he hopes will save his family may destroy it instead.

Half a world away on the lawless coast of Somalia, Ismail Adan Ibrahim is living a life of crime in violation of everything he was raised to believe—except for the love and loyalty driving him to hijack ships for ransom and plot the rescue of his sister, Yasmin, from the man who murdered their father. There is nothing he will not do to save her, even if it means taking innocent lives.

Paul Derrick is the FBI’s top hostage negotiator. His twin sister, Megan, is a celebrated defense attorney. They have reached the summit of their careers by savvy, grit, and a secret determination to escape the memory of the day their family died. When Paul is dispatched to handle a hostage crisis at sea, he has no idea how far it will take him and Megan into the past—or the chance it will give them to redeem the future.

Across continents and oceans, through storms and civil wars, the paths of these individuals converge in a single, explosive moment. It is a moment that will test them and break them, but it will also leave behind an unexpected glimmer of hope—that out of the ashes of tragedy and misfortune, the seeds of justice and reconciliation can grow.

Corban Addison is the international bestselling author of A Walk Across the Sun, The Garden of Burning Sand, and The Tears of Dark Water,which won the 2016 Wilbur Smith Adventure Writing Award. His novels have been published in over 25 countries. An attorney, activist, and world traveler, he is a supporter of humanitarian and social justice causes around the world. He lives with his wife and children in Virginia. Learn more at his website corbanaddison.com Facebook: CorbanAddison Twitter: @CorbanAddison

▼▲
I'm the author/artist and I want to review The Tears of Dark Water - eBook.
Back
Back