Skip to main content
CYBER WEEK SALE! Spot great deals up to 88% off. >
The Survivor, Families of Honor Series #3
By: Shelley Shepard Gray
Stock No: WW020635 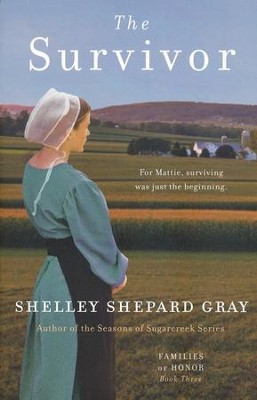 The Survivor, Families of Honor Series #3

▼▲
New York Times Bestselling Author, Shelley Shepard Gray - Mattie has faced more in her twenty-three years than she ever imagined possible. Having successfully battled cancer, she's ready to reenter the world with hopes for her future. But while she was in and out of hospitals, other Amish girls her age were courting and finding the men they would marry. The only man who's ever made her heart beat faster is Graham Weaver, her best friend, who has always been there to comfort her, in good times and bad. Is it finally time for their friendship to become something more?

“Shelley Shepard Gray writes with honesty, tenderness, and depth. Her characters are admirable, richly-layered and impossible to forget.”
—Jillian Hart

One of today’s most beloved authors of inspirational Christian fiction, Shelley Shepard Gray completes her acclaimed Families of Honor series with The Survivor—a poignant and beautiful story of love and faith in a small Amish community. Delving once more into the lives of these devout and fascinating folk, as she did in her popular Sisters of the Heart and Seasons of Sugarcreek novels, Gray tells the story of a young Amish woman who has survived the ravages of cancer, but now longs for the love of the one man who can heal her lonely heart. Like Beverly Lewis, Wanda Brunstetter, and Cindy Woodsmall, Shelley Shepard Gray introduces readers to characters they will never forget as she masterfully depicts a world of simple living, abiding faith, and honest emotions.

▼▲
After successfully battling cancer, Mattie Lapp is ready to rejoin her Amish community and find love in The Survivor, Shelley Shepard Gray's third installment of the Families of Honor trilogy. Mattie wants to find someone who will love her despite her scars and health issues. The only man she ever cared for is her best friend, Graham Weaver, but when Jenna Yoder claims him as the father of her baby, Mattie is devastated. Mattie struggles with self-confidence and a constant fear of her cancer returning. She looks to James 1:2-4 to comfort her: "Consider it pure joy, my brothers, whenever you face trials of many kinds, because you know that the testing of your faith develops perseverance. Perseverance must finish its work so that you may be mature and complete, not lacking anything."

The point of view changes each chapter, and this method weaves the individual stories into a semi-realistic picture of the Amish community. Mattie and Graham's relationship is sweet. In comparison, the secondary characters have a few scenes that tug at the heart. The one event that affects all the threads is the storm toward the end of the novel. In midst of tragedy, the characters face their faults and learn to how to reconcile their fears.

Mattie was in the hospital while other Amish young women were courting. Newly released from doctors and needles, she is excited to pursue her dreams. In the process, she falls in love with her best friend, but that love does not come without trials. Mattie finally realizes Graham's love after a series of painful experiences.

When I finished The Survivor, I wished that the author had made the characters a bit more three-dimensional. The plot is an intriguing idea: How does an Amish woman reconcile her faith after she has battled cancer? The plot elements were solid, but I wanted to know more about the characters. - Ashlee Amann, www.ChristianBookPreviews.com

▼▲
I'm the author/artist and I want to review The Survivor, Families of Honor Series #3.
Back
Back