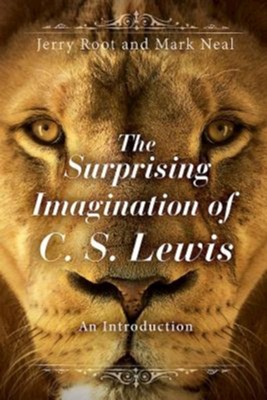 The Surprising Imagination of C.S. Lewis: An Introduction - eBook

Narnia, Perelandra—places of wonder and longing. The White Witch, Screwtape—personifications of evil. Aslan—a portrait of the divine. Like Turkish Delight, some of C.S. Lewis’s writing surprises and whets our appetite for more. But some of his works bite and nip at our heels. What enabled C.S. Lewis to create such vivid characters and compelling plots? Perhaps it was simply that C.S. Lewis had an unsurpassed imagination. Or perhaps he had a knack for finding the right metaphor or analogy that awakened readers’ imaginations in new ways. But whatever his gifts, no one can deny that C.S. Lewis had a remarkable career, producing many books in eighteen different literary genres, including: apologetics, autobiography, educational philosophy, fairy stories, science fiction, and literary criticism. And while he had and still has critics, Lewis' works continue to find devoted readers.

The purpose of this book is to introduce C.S. Lewis through the prism of imagination. For Lewis, imagination is both a means and an end. And because he used his own imagination well and often, he is a practiced guide for those of us who desire to reach beyond our grasp. Each chapter highlights Lewis’s major works and then shows how Lewis uses imagination to captivate readers. While many have read books by C.S. Lewis, not many readers understand his power to give new slants on the things we think we know. More than a genius, Lewis disciplined his imagination, harnessing its creativity in service of helping others believe more deeply.

"Truly fresh, rhetorically astute works about C. S. Lewis are rare, but this provocative new volume by Jerry Root and Mark Neal emerges at just the right time to reinvigorate Lewis scholarship beyond the clich&eacute;s we continue to repeat to each other. The Surprising Imagination of C. S. Lewis delivers just that salvo, an ingenious, empathetic, lavishly informed elucidation of Lewis’s understanding of the life of the imagination."

"Our grasp of ’imagination’ is such a pale and paltry thing; Neal and Root offer a much-needed corrective by illustrating Lewis’s robust use of the word. The happy result is a more accurate and nuanced reading of Lewis. But there is more: through their careful work, we are graced with a rich, new vocabulary to discern and describe the many uses of creative imagination all around us."

"This fabulous book on Lewis’s imagination will delight readers new to Lewis and those who, like the authors, have been reading him for decades. It shimmers with the joy of exploration and discovery. The Surprising Imagination of C. S. Lewis is a reliable and inspiring guide not only to Lewis but to a treasure trove of imaginative books that fired Lewis’s own imagination. In Robert Frost’s delightful phrase, this book is the occasion for a ’fresh think.’"

"Jerry Root and Mark Neal make excellent use of Lewis's literary criticism of other authors to show how he employed different varieties of imagination in his own works. The result is a good book about Lewis and an even better one on the capacity of imagination to enrich each of our lives every day."

"For nearly four decades I have been reading books and articles in the field of Lewis studies. This volume is one of the most original and fascinating books on Lewis to appear in a long time."

▼▲
Jerry Root Ph.D. is an Associate Professor at Wheaton College. He is the coeditor of the bestselling The Quotable C. S. Lewis and author of C. S. Lewis and a Problem of Evil. He has lectured on Lewis at 62 Universities in 11 countries.

Mark Neal is the VP of digital marketing at a Chicago-based marketing firm and an independent C.S. Lewis scholar. He writes and publishes on Lewis as well as other topics.

▼▲
I'm the author/artist and I want to review The Surprising Imagination of C.S. Lewis: An Introduction - eBook.
Back
×
Back
×