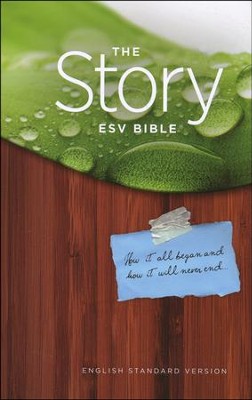 This product is part of our current Cyber Monday promotion.
Buy Item

The Story ESV Bible is the first Bible edition to use the popular evangelism content published in The Story by Spread Truth Ministries.
This new outreach Bible features a 12-page, beautifully designed and full-color presentation of the storyline of the Bible. The material covers creation, the fall, the death and resurrection of Jesus, and the hope of the second coming. It also provides a clear invitation to readers to receive Christ as their Savior.
Specially prepared, full-page introductions by the creators of The Story show how each Bible book contributes to the Bible’s storyline. Affordably priced, this is a useful edition for evangelism and outreach, and to give to new believers.

The Story ESV Bible uses the popular evangelism content published in The Story by Spread Truth Ministries to detail the storyline of the Bible and clearly present the gospel.

Jonathan Leeman (PhD, University of Wales) is the editorial director for 9Marks and cohost of the Pastors Talk podcast. He is the author or editor of over a dozen books and teaches at several seminaries. Jonathan lives with his wife and four daughters in a suburb of Washington, DC, and is an elder at Cheverly Baptist Church. You can follow him on Twitter @jonathanleeman.

Russell Moore (PhD, The Southern Baptist Theological Seminary) is the eighth president of the Ethics & Religious Liberty Commission of the Southern Baptist Convention, the moral and public policy agency of the nation's largest Protestant denomination. A widely-sought commentator, Dr. Moore has been called "vigorous, cheerful, and fiercely articulate" by the Wall Street Journal. He is the author of several books, including Onward, The Kingdom of Christ, Adopted for Life, and Tempted and Tried, and he blogs regularly at RussellMoore.com and tweets at @drmoore. He and his wife, Maria, have five sons.

Joe Thorn (MDiv, The Southern Baptist Theological Seminary) is the founding and lead pastor of Redeemer Fellowship in St. Charles, Illinois. He is an active blogger at JoeThorn.net, a contributor to The Story ESV Bible and The Mission of God Study Bible, and the author of Note to Self: The Discipline of Preaching to Yourself and Experiencing the Trinity: The Grace of God for the People of God. He and his wife, Jen, have four children.

▼▲
I'm the author/artist and I want to review The Story ESV Bible.
Back
Back