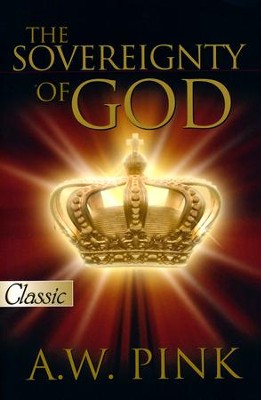 The Sovereignty of God [Bridge-Logos Publishing, 2007]

▼▲
Who's in control of this world---God or the devil? In this best-selling classic, A.W. Pink answers such profound questions in a language the average Christian layperson will find not only understandable but totally engaging. Pink, one of the most influential evangelical authors of the last century, writes with fiery passion and brilliant clarity, giving biblical answers to our deepest questions regarding the "sadly neglected and little understood" doctrine of the sovereignty of God.

▼▲
Arthur Walkington Pink (April 1, 1886 - July 15, 1952) was an evangelist and biblical scholar known for his Calvinist and Puritan teachings. Born in England, Pink became a Christian in his early 20s and emigrated to the United States to study at Moody Bible Institute. He pastored churches in Australia and England before returning to the U.S. to pastor churches in Colorado, California, Kentucky, and South Carolina. Pink returned to England in 1934, turning his Christian service toward writing books and pamphlets. After his death, his works were republished by the Banner of Truth Trust and reached a much wider audience as a result, making him one of the most influential evangelical authors in the second half of the twentieth century. His writing sparked a revival of expository preaching and focused readers' hearts on biblical living. His works include numerous Bible studies and books such as The Attributes of God, The Doctrine of Justification, The Patience of God, and The Total Depravity of Man.

This book contains the Forewords from the First, Second and Third editions at the beginning of the book.

▼▲
I'm the author/artist and I want to review The Sovereignty of God [Bridge-Logos Publishing, 2007].
Back
Back