Skip to main content
The Society of Extraordinary Raccoon Society on Boasting
By: Randall Goodgame
Illustrated By: Joe Sutphin
Stock No: WW940955 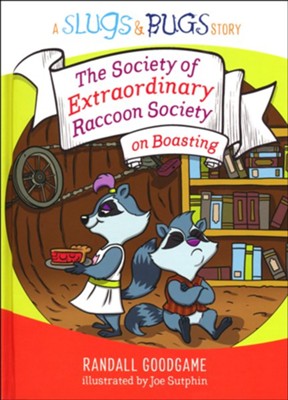 The Society of Extraordinary Raccoon Society on Boasting

▼▲
In The Society of Extraordinary Raccoon Society of Boasting by Randall Goodgame, and illustrated by Joe Sutphin, Maggie and Mort y Raccoon have given up their sneaky ways and have joined the society. When the pair get into a fight over who gives the best charity, they are in for an important lesson about boasting with a lesson from Matthew 6.

▼▲
Young Maggie and Morty are the newest recruits to the SOERS, and they’ve given up their previous thieving ways. But when Maggie starts boasting that her newfound generosity is better than Morty’s, the young raccoons must learn a lesson about bragging from Matthew 6:2–3 and learn to give quietly instead.

▼▲
I'm the author/artist and I want to review The Society of Extraordinary Raccoon Society on Boasting.
Back
Back