Skip to main content
SPRING CYBER EVENT STARTS NOW: And it's a really BIG deal! Up to 88% off through 5/24>
The Snowman
By: Raymond Briggs
Stock No: WW84664 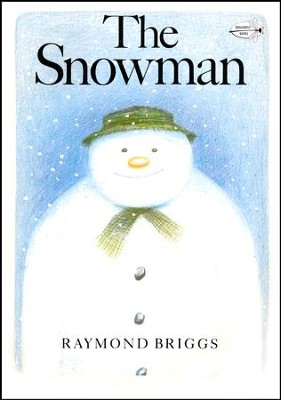 ▼▲
Evocative, wordless pages summon up childhood dreams and fantasies like no other picture book. A modern-day classic, Raymond Briggs' The Snowman is a haunting look at a one-night adventure as the little boy and his snowman friend fly over field and ocean to reach the North Pole. They celebrate and dance the night away under the lights of the aurora borelis with an entire clan of snowmen who've gathered together to celebrate the winter season. This cherished tale conveys the joys and unique sorrows of childhood in beautiful, colored-pencil drawn frames that conjure up a new world of possibilities. 32 pages, softcover.

▼▲
Illus. in full color. A wordless story. The pictures have "the hazy softness of air in snow. A little boy rushes out into the wintry day to build a snowman, which comes alive in his dreams that night. The experience is one that neither he nor young 'readers' will ever regret or forget."--(starred) Booklist.

▼▲
Raymond Briggs was born in London in 1934.  At the age of 15, he  went to Wimbeldon Art School to learn how to draw, as he wanted to become a cartoonist.  But there he was told that cartooning was not a profession for gentlemen and that he ought to be a painter.  Raymond then went on to the Slade School in London to study painting as a full-time student.  During his spare time, he began work on a portfolio of illustrations of all kinds, including jackets and a wide selection of drawings to take to publishers.  After illustrating for advertising, newspapers and books, Raymond discovered that book illustration inspired him the most, since it offered far greater variety and freedom than anything else.  Raymond has always found it unfavorable to sustain a consistent illustration style for a long period of time.  He is always seeking to try something else new and different with his work.  Some of Raymond's best known works are The Snowman , The Man , and The Bear .  The setting for The Snowman is based on Raymond's own house and garden, which is in Sussex, England at the foot of South Downs, a few miles from Brighton.

▼▲
I'm the author/artist and I want to review The Snowman.
Back
Back