Skip to main content
The Shape of Sola Scriptura
By: Keith A. Mathison
Stock No: WW67749 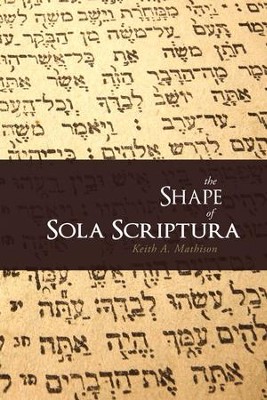 The Shape of Sola Scriptura

▼▲
Are Protestants losing sight of the church's creeds and confessions---trading "Scripture alone" for "Scripture only"? Take an in-depth look at this foundational doctrine of the faith. Contrasting the ancient, medieval, and classical Protestant view of sola Scriptura against the interpretation of many modern proponents---and opponents---Mathison calls evangelicals to a renewed confessional consciousness. 364 pages, softcover from Canon.

▼▲
In what shape do we find the doctrine of sola Scriptura today? Many modern Evangelicals see it as a license to ignore history and the creeds in favor of a more splintered approach to the Christian living. In the past two decades, Roman Catholic and Eastern Orthodox apologists have strongly tried to undermine sola Scriptura as unbiblical, unhistorical, and impractical. But these groups rest their cases on a recent, false take on sola Scriptura. The ancient, medieval, and classical Protestant view of sola Scriptura actually has a quite different shape than most opponents and defenders maintain. Therein lies the goal of this book-an intriguing defense of the ancient (and classical Protestant) doctrine of sola Scriptura against the claims of Rome, the East, and modern Evangelicalism. "The issue of sola Scriptura is not an abstract problem relevant only to the sixteenth-century Reformation, but one that poses increasingly more serious consequences for contemporary Christianity. This work by Keith Mathison is the finest and most comprehensive treatment of the matter I've seen. I highly recommend it to all who embrace the authority of sacred Scripture." -R.C. Sproul, Ligonier Ministries

▼▲
I'm the author/artist and I want to review The Shape of Sola Scriptura.
Back