Skip to main content
Get Christmas Ready Sale: Deals on over 1,150 titles thru 9/27.
The Secret Garden
By: Frances Hodgson Burnett
Stock No: WW831412 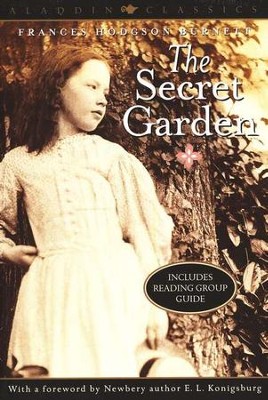 ▼▲
Bratty and spoiled Mary Lennox is orphaned when her parents fall victim to a cholera outbreak in India. As a result, Mary becomes the ward of an uncle in England whom she has never met. As she hesitantly tries to carve a new life for herself at imposing and secluded Misselthwaite Manor, Mary befriends a high-spirited boy named Dickon and investigates a secret garden on the Manor grounds. She also discovers a sickly young cousin, Colin, who has been shut away in a hidden Manor room. Together Mary and Dickon help Colin blossom, and in the process Mary finds her identity and melts the heart of her emotionally distant uncle. Includes reading group study.

▼▲
With a new movie coming in 2020, it’s time to rediscover Frances Hodgson Burnett’s classic story of a little girl, a mysterious hidden garden, and the healing power of nature.

When orphaned Mary Lennox comes to live at her uncle’s great house on the Yorkshire Moors, she finds it full of secrets. The mansion has nearly one hundred rooms, and her uncle keeps himself locked up. And at night, she hears the sound of crying down one of the long corridors.

The gardens surrounding the large property are Mary’s only escape. Then, Mary discovers a secret garden, surrounded by walls and locked with a missing key. With the help of two unexpected companions, Mary discovers a way in—and becomes determined to bring the garden back to life.

▼▲
Frances Hodgson Burnett (1849–1924) was born in Manchester, England, but moved to America as a teenager. Little Lord Fauntleroy was published in 1886 and was dramatized during Burnett's lifetime. The story lives on today in videos and movies. Though she began writing novels for adults, she gained lasting success writing for children. She is best known for Little Lord Fauntleroy, A Little Princess (1905), and The Secret Garden (1911).

▼▲
I'm the author/artist and I want to review The Secret Garden.
Back
Back