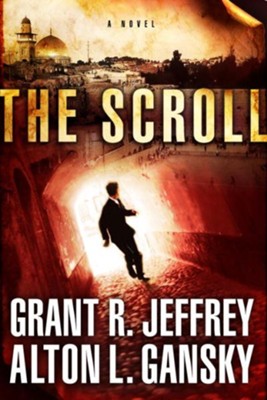 The Scroll: A Novel - eBook

▼▲
In a world where faith has been eclipsed by the allure of doubt, The Scroll is a gripping adventure to find a truth worth dying for.

Dr. David Chambers, leading archaeologist, has spent his professional career uncovering the facts in the artifacts. His work sets the standard for biblical research in the Holy Land. But surrounded by the evidence, David has sunk into an abyss of doubt. A painful experience with a seemingly unresponsive God has left him without hope and the Old Testament scriptures that used to fill his mind with wonder now drive him to frustration. His unanswered questions have ripped him from both his academic pursuits and, his fianc&eacute;e, Amber.

An old friend and mentor reaches out to David, enticing him with the riches described in the enigmatic Copper Scroll. Losing ground with his peers, his love, and his faith, David Chambers has a choice to make. Will he undertake one final dig to unlock a secret that could alter the course of history? Do the mysteries of the Old Testament hold the key to the political turmoil of the Middle East?

One last dig. One final descent into the twisted tunnels of ancient Jerusalem. Will the truth be found among the treasures that lie beneath the holy city?

Dr. Grant Jeffrey is internationally known as a leading teacher on Bible prophecy. His twenty best-selling books have been enjoyed by more than five million readers.

Alton L. Gansky has written or collaborated on more than thirty novels and nine nonfiction works. He has been a Christy Award finalist for A Ship Possessed and an Angel Award winner for Terminal Justice. He lives in central California with his wife.

▼▲
If you're a fan of biblical archeology and like to read page-turning suspense, then The Scroll by Grant R. Jeffrey and Alton L. Gansky is definitely for you. Set just a couple of years in the future, The Scroll is a "suppose it happened" dash through Jerusalem with three of the worlds most renowned archeologists. Brought together for the dig of a lifetime, they soon find themselves in the middle of a battle between good and evil, Israel and the rest of the world, life and death.

With the combined talents of author's like Jeffrey, an expert on biblical prophecy and archeology, and Gansky, who has written more than thirty novels, the book was bound to be a winner -- and it is. When a powerful rabbi/archeologist convinces David Chambers to accept the challenge of the dig of a lifetime, he has no idea it will team him with former fiance, Amber Rodgers, and long-time enemy, Nuri Aumann. Set before them is the task to find and uncover treasure and artifacts from the tabernacle, described in Exodus 25, and the first temple of Israel. Since men have sought these items for more than two thousand years, their task is not an easy one.

The main characters are an interesting mix of acquaintances, old friends, and arch-nemeses. As the plot unfolds, they not only dig for artifacts, they also try to uncover faith and relationships that were lost to pride and grief. The deeper they dig beneath Old Jerusalem, the closer they come to restoring bothand tearing the world apart in the process.

Even though proof of biblical authenticity is what first drew him to archeology, David Chambers lost his faith when his mother died. Loss of his faith, in turn, led to the loss of fiance Amber Rodgers, a committed Christian, for whom he discovers he still has deep feelings. Apparently Nuri Aumann, the third member of the dig team, also has an interest in Amber. Their relationships are as tangled as the Old Jerusalem tunnels they dig through, none of which is resolved until they are on the brink of inciting another world war.

Part speculative fiction, part suspense, entirely thrilling, The Scroll is highly recommended for all fans of fiction, but especially those Christians with an interest in Old Testament prophecy and biblical archeology. While the book is speculative, it bases the plot on Judeo-Christian history and archeological facts, blending them in a thoroughly intriguing and exciting story that will have readers turning page after page.  Dr. Jan Wallace Reber, www.ChristianBookPreviews.com