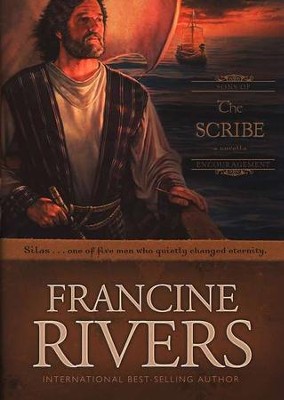 ▼▲
Volume 5 in the "Sons of Encouragement" series by best-selling author Francine Rivers introduces us to Silas. His wealth allowed him a position of power. His obedience led him to give up his worldly possessions. His humility helped him dedicate his life to recording the words of others.

▼▲
Book 5 in the 5-book biblical historical fiction series by the New York Times bestselling author of Redeeming Love and A Voice in the Wind.

His wealth allowed him a position a power.
His obedience led him to give up his worldly possessions.
His humility helped him dedicate his life to recording the words of others.

After the death and resurrection of Jesus, Peter and Paul preached to the nations, carrying Christ’s message to all who would listen. But when they were silenced, it was their scribe Silas who brought their words to future generations. Be challenged by this faithful man whose story we must never forget.

The Scribe is the story of Silas and book five in the popular Sons of Encouragement series about five men who quietly changed eternity.

▼▲
The last installment of Francine Rivers Sons of Encouragement series traces the life of Silas, the New Testament scribe and companion of the apostles Peter and Paul. It is based on the minimal sketch we receive written in Scripture (Acts 15, Acts 16, Acts 17), and elaborated by the author to breathe life into the character, revealing emotions, strengths and weaknesses, and a love for the Savior.
The story begins as Silas, who is emotionally, spiritually, and physically exhausted and discouraged after the brutal deaths of Peter and Paul, arrives in the home of Epanetus, a fellow Christian. The local believers treat him somewhat as a celebrity, because he had heard Jesus teach and had witnessed the risen Lord. They encourage him to write down the details of his life, from beginning to end, which begins a journey for Silas that expose his weaknesses and build up his faith.
I enjoyed the story of this man who lived in the shadow of greater men. It brought me right into first-century Christianity, and revealed the very real people who gave up everything to follow the Savior.  Tracey Bonsell, Christian Book Previews.com

▼▲
I'm the author/artist and I want to review The Scribe: Silas, Sons of Encouragement Series #5.
Back
Back