Skip to main content
The Scarlet Letter
By: Nathaniel Hawthorne
Stock No: WW80489 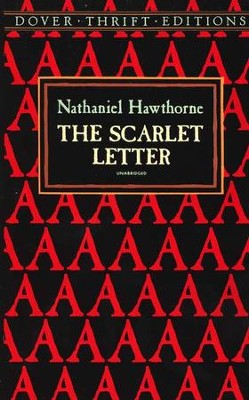 ▼▲
First published in 1850, The Scarlet Letter is Nathaniel Hawthorne's masterpiece and one of the greatest American novels. It's themes of sin, guilt and redemption, woven through a story of adultery in the early days of the Massachusetts Colony, are revealed with remarkable psychology penetration and understanding of the human heart.
Hester Prynne is the adulteress, forced by the Puritan community to wear a scarlet letter A on the breat of her gown. Arthur Dimmesdale, the minister and the secret father of her child, Pearl, struggles with the agony of conscience and his own weakness. Roger Chillingworth, Hester's husband, revenges on himself on Dimmesdale by calculating assaults on the frail mental state of the conscience-stricken clerric. The result is an American tragedy of stark power and emotional depth that has mesmerized critices and readers for nearly a century and a half.

▼▲
An "A" for "adultery" marks Hester Prynne as an outcast from the society of colonial Boston. Although forced by the puritanical town fathers to wear a bright red badge of shame, Hester steadfastly resists their efforts to discover the identity of her baby's father. The return of her long-absent spouse brings new pressure on the young mother, as the aggrieved husband undertakes a long-term plot to reveal Hester's partner in adultery and force him to share her disgrace.
Masterful in its symbolism and compelling in its character studies, Nathaniel Hawthorne's tale of punishment and reconciliation examines the concepts of sin, guilt, and pride. The Scarlet Letter was published to immediate acclaim in 1850. Its timeless exploration of moral and spiritual issues, along with its philosophical and psychological insights, keep it ever relevant for students of American literature and lovers of fiction.
A selection of the Common Core State Standards Initiative.

▼▲
Born on the fourth of July in 1804, Nathaniel Hawthorne wrote the stories that lie at the heart of the American Romantic movement. His portraits of colonial life reflect his Puritan heritage and offer fascinating profiles of individuals who strive for freedom from social conventions.

▼▲
I'm the author/artist and I want to review The Scarlet Letter.
Back
Back