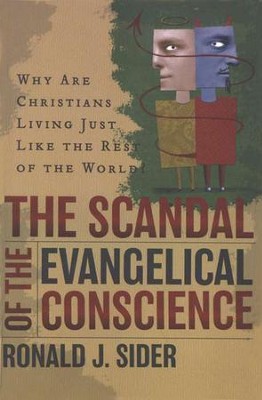 The Scandal of the Evangelical Conscience

▼▲
Subtitled "Why Are Christians Living Just Like the Rest of the World?" this book makes a strong case for why faith should make a difference in areas such as racism, materialism, hedonism, egotism, and more. Are we truly dedicated to the Lord or simply questing after money, sex, or personal self-fulfillment? 144 pages, softcover.

▼▲
Ron Sider asserts that "by their daily activity, most 'Christians' regularly commit treason. With their mouths they claim that Jesus is their Lord, but with their actions they demonstrate their allegiance to money, sex, and personal self-fulfillment."
In this candid and challenging book, Sider addresses an embarrassing reality: most Christians' lives are no different from the lives of their secular neighbors. Hedonism, materialism, racism, egotism, and many other undesirable traits are commonplace among Christians.
Rather than simply a book bemoaning the state of American Christianity today, The Scandal of the Evangelical Conscience offers readers solutions to repair the disconnect between belief and practice. While it's not easy medicine to take, this book is a much-needed prophetic call to transformed living.

▼▲
Ronald J. Sider is president of Evangelicals for Social Action and professor of theology, holistic ministry, and public policy at Eastern Baptist Theological Seminary. The author of more than twenty books, he resides in Philadelphia, Pennsylvania.

▼▲
This stinging jeremiad by Sider (Rich Christians in an Age of Hunger) demands that American Christians start practicing what they preach. Evangelical Christians, says Sider, are very much like their non-Christian neighbors in rates of divorce, premarital sex, domestic violence and use of pornography, and are actually more likely to hold racist views than other people. Why the discrepancy between American Christians' practices and what the Bible teaches? Sider decries the materialism of most churches, marshaling evidence to demonstrate that American Christians' charitable giving has decreased even while their income has risen. Although they are collectively the wealthiest Christians in the history of the world, they don't take care of the poor, he says. Sider reviews the New Testament to argue that Christians can't accept Jesus as their Savior without also honoring him as their Lord and obeying his teachings. In the final chapters, he insists that Christians must strengthen their accountability to the church and "dethrone mammon" (money) as the real object of worship. Sider's issues are of course selective; despite careful attention to the subject of racial inequality, there is no mention of gender inequality, and Sider quotes no women alongside such heavyweights as Wesley and Bonhoeffer. Still, his criticisms are incisive and prophetic. (Feb.) Copyright 2005 Reed Business Information.

▼▲
I'm the author/artist and I want to review The Scandal of the Evangelical Conscience.
Back
Back