Skip to main content
The Rise of Christianity
By: Rodney Stark
Stock No: WW7710X 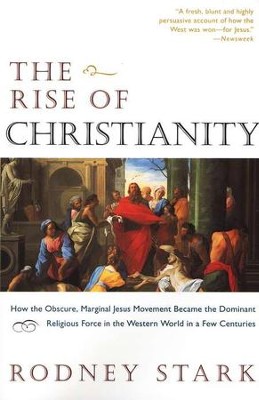 The Rise of Christianity

▼▲
Finally, all questions concerning the rise of Christianity are one: How was it done? How did a tiny and obscure messianic movement from the edge of the Roman Empire dislodge classical paganism and become the dominant faith of Western civilization? Although this is the only question, it requires many answers--no one thing led to the triumph of Christianity. This book details how that obscure, marginal Jesus movement became the dominant religious force in the Western world in just a few centuries. Some of the subjects convered are the role of women, the martyrs, class basis and Christianizing the urban empire. The author gives explanations to why and how it succeeded as well as unexpected blockades along the way.

This "fresh, blunt, and highly persuasive account of how the West was won—for Jesus" (Newsweek) is now available in paperback. Stark's provocative report challenges conventional wisdom and finds that Christianity's astounding dominance of the Western world arose from its offer of a better, more secure way of life.

"Compelling reading" (Library Journal) that is sure to "generate spirited argument" (Publishers Weekly), this account of Christianity's remarkable growth within the Roman Empire is the subject of much fanfare. "Anyone who has puzzled over Christianity's rise to dominance...must read it." says Yale University's Wayne A. Meeks, for The Rise of Christianity makes a compelling case for startling conclusions. Combining his expertise in social science with historical evidence, and his insight into contemporary religion's appeal, Stark finds that early Christianity attracted the privileged rather than the poor, that most early converts were women or marginalized Jews—and ultimately "that Christianity was a success because it proved those who joined it with a more appealing, more assuring, happier, and perhaps longer life" (Andrew M. Greeley, University of Chicago).

▼▲
I'm the author/artist and I want to review The Rise of Christianity.
Back
Back