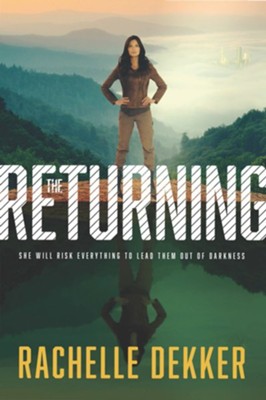 The Returning #3, in the Seer series, by Rachelle Dekker

Carrington and Remko had a baby Elise who was kidnapped in the Authority City. They were forced flee and leave her held captive. Twenty years later, seven members of the Seers warriors are chosen to rescue Elise and the Authority City to its original condition. All this time Elise thought she was abandoned and forgotten. Is she the key to their victory?

▼▲
They say the Awakening is coming.
That she’s the key.

But can she find her identity in the light
Before she perishes in the dark?


Twenty years have passed since Carrington and Remko Brant’s baby, Elise, was kidnapped and they were forced to leave her captive in the Authority City. Though they fled with the Seers far from Authority reach, they’ve never given up hope of rescuing their daughter from the man who betrayed them. Now Authority President, he’s ushered the city into a new era of “peace”—one where the Scientist Roth Reynard’s Genesis Serum has eradicated all memory of emotion or rebellion.

But the mysterious Aaron and his Seers are once again on the move, threatening the illusion the Authority has worked so hard to build. As the Seers send seven chosen warriors to rescue Elise and bring restoration to the Authority City, the lines are drawn for a final battle between light and darkness. The key to ultimate victory may rest within the strangely powerful girl who has felt forgotten but was never abandoned—a truth she’ll need to wage war against the powerful forces of evil.

▼▲
The third and final book of Dekker’s Seers series (after The Calling) begins nearly two decades after Elise Brant was kidnapped as her parents and other Seers (those who can sense their true calling) fled Authority City. After the Seers’ departure, Dr. Roth Reynard injected Authority residents with Genesis Serum, erasing memories and creating an unnatural, robotic state of peace. Immune to the serum, Elise has long posed a threat. She survives under the protection of Authority president Jesse Cropper, who struggles with Reynard’s methods and madness. Meanwhile, the Seers, who have established a sanctuary in the mountains, have appointed a group of seven young people to return to Authority City in order to save those who have been deceived through the serum—and to search for Elise. Fearing Elise’s power, Reynard orders her death and sends security forces to round up and return the rebels to Authority City. Once the seven find Elise, it’s a battle against time and resources to bring light to the delusional darkness fostered by Reynard. Dekker pens another striking science fiction thriller including a well-developed dystopian society and strong depictions of good versus evil that can be easily read as a standalone.

▼▲
I'm the author/artist and I want to review The Returning #3.
Back
Back