Skip to main content
SPRING CYBER EVENT STARTS NOW: And it's a really BIG deal! Up to 88% off through 5/24>
The Resolution for Women, LeatherTouch
By: Priscilla Shirer, Stephen Kendrick, Alex Kendrick
Stock No: WW685026 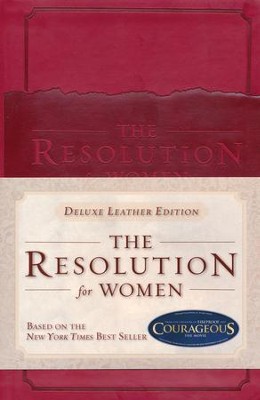 The Resolution for Women, LeatherTouch

In The Resolution for Women, Priscilla Shirer challenges all women to be intentional about embracing and thriving in God's beautiful and eternal calling on their lives. Shoppers looking for a gift for their mom, grandmother, sister, friend, or self, will find encouragement for becoming a godly woman. LeatherTouch w/Ribbon Marker.

▼▲
With Everything You Have to Do, Have You Taken The Time to Decide Who You Want to Be?

From best-selling author and speaker, Priscilla Shirer, in partnership with the creators of The Love Dare, challenges all women in The Resolution for Women to be intentional about embracing and thriving in God’s beautiful and eternal calling on their lives.

Layered with biblical truth and seasoned with daily encouragement, this book will inspire the woman you see in the mirror to trust God’s perfect plan for her life, resolving to become "purposefully feminine, surprisingly satisfied, and faithfully His." Shirer explains how today's women can and should live out their own resolution. It is "a defining banner that hangs over your life, written in the ink of your own choices." A woman's banner should be an accurate reflection of who she desires to be-someone completely Christ-centered who blesses and changes things in her world for the better. Written in partnership with the movie Courageous and Stephen and Alex Kendrick’s book, The Resolution for Men, it is designed to inspire a revolution.

▼▲
Priscilla Shirer is a Bible teacher and conference speaker with a Master’s degree in Biblical Studies from Dallas Theological Seminary. Also a popular author, her books include the New York Times best seller The Resolution for Women, One in a Million, and Life Interrupted. Priscilla is married to Jerry with whom she founded Going Beyond Ministries. They have three sons and live in Dallas, Texas.

Stephen Kendrick is an ordained minister who has served families for 20 years in student ministry and associate pastor positions. Along with his brother Alex, he is also a screenwriter (Facing the Giants, Fireproof, Courageous), movie producer, and coauthor of two New York Times best-selling books (The Love Dare, The Resolution for Men). Stephen and his wife, Jill, have six children.

Alex Kendrick is an ordained minister and New York Times best selling coauthor of The Love Dare and The Resolution for Men. He has spoken in numerous countries to students, families, and men's groups. He is also an accomplished actor, screenwriter, and film director, whose credits include Facing the Giants, Fireproof, and Courageous. He and his wife, Christina

▼▲
I'm the author/artist and I want to review The Resolution for Women, LeatherTouch.
Back
Back