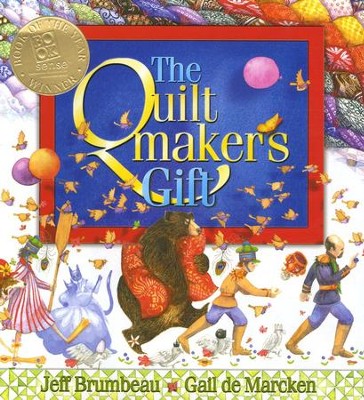 ▼▲
This charming fable for our times celebrates the joy of giving.
A generous quiltmaker, with magic in her fingers, sews the most beautiful quilts in the world, then gives them away. A greedy king, his storehouse stuffed with treasures, yearns for something that will make him happy. Will the quiltmaker sew a quilt for the king? Will the king ever learn to share? Can the quiltmaker teach the king to be happy? What will the king do with all his splendid things? Look for clues to the story in the quilts!

▼▲
In this enchantingly told original folktale, a wise quiltmaker makes the most beautiful quilts in the world – but she will give them only to those who have nothing. When a rich, dissatisfied king insists that she give him one of her quilts, she gives him what seems an impossible task: to give away all he owns. One by one, the king gives away his many possessions, and finds that the more he gives away, the happier he is. Finally, when the king has nothing, the quiltmaker gives him the promised quilt. But he knows that the true reward for his generosity has been the smiles of those he has helped.The Quiltmaker's Gift has touched the hearts of readers young and old, bringing it to the PW bestseller list and earning it numerous awards and commendations. The heartwarming, strongly moral tale supports important values, and the detailed illustrations, featuring dozens of lovingly rendered quilt patterns, offer hours of delight. Children will delight in this new commemorative edition, which includes a special Quiltmaker's Gift Box so that, following the example of the Quiltmaker, they can create their own beautiful quilts. The gift box includes a quarter yard of quilting fabric, step-by-step instructions for simple, fun projects, and helpful tips and advice for eager young quiltmakers.

▼▲
Jeff brumbeau grew up in New York City, where he lived with his mother and sister in his wodowed grandmother's house. His mother worked hard to support her family, who struggled to get by.Jeff has had a variety of jobs befitting a degree in English, he says, including pumping gas, carpentry, painting, working in a mail room, car wash, factory, and candy store, on an oil rig in Wyoming and in advertising.He lives in Chicago and Taos with Marcia, his wife; Samantha, the opera singin Persian cat; and Louis, the daredevil alley cat.

Gail de Marcken has been lucky enough to have lived all over the world. She joined the Peace Corps in 1965, and argued her way to a posting four days upriver in Borneo, where she met another volunteer. Two years later, he called her in Minnesota and offered to carry supplies back to her teacher's college. He had just gotten a job with the Peace Corps located near the college. Three days late they got married, and she went with him back to Borneo. They had thirty of their thirty-four years together in Asia, Africa, and Eastern Europe. They have three children, and have experienced together: one war, a coup, an evacuation, ten countries (three in which they were shot at), malaria, and lots of adventures. Most recently, they lived in Latvia. Over the years, they managed to return to their beloved fifteen acres of land near Ely, Minnesota, every summer. They now live there, in paradise, full-time.

Gail has found models for her characters in the people and figures that populate her world. The inspiration for Miss Hunnicutt came from Gail's sister-in-law. A great and animated teacher, she is nicknamed Rubber Face. The name comes from the fact that she loves to make faces, and is an avid collector of rubber noses. Her students know what subject is coming, and how quiet they have to be, by watching the type of nose she is wearing. Like Miss Hunicutt, she is not a timid person.

Also, in Miss Hunnicutt's Hat, Gail was particularly interested in the portrayal of Yadda. She tried to make him appear vaguely Jewish or Middle Eastern and thus different from the others in a more important way. The boys are always sneering or shooting at him with their slingshots, but then they are impressed with his juggling skills and want to learn for themselves. Perhaps they will learn to appreciate him.

The model that she used for McSnoot was an older Peace Corps volunteer she met while serving in Lithuania. It was the volunteer's young spirit that influenced Gail to let McSnoot be the only character to change and learn. The rest of the town just copies the chicken hat that pleased the queen.

In a Latvian church near her home, Gail found a polished head that inspired her portrayal of the king in The Quiltmaker's Gift. She liked the king's head so much that she made his crown fall off a number of times so that people could see it. It is to Gail's niece that the king is reading when the Quiltmaker finds him at the end of his gift-giving travels. She also met a merry Greek woman, who became her inspiration for the Quiltmaker. They are now great friends.

▼▲
I'm the author/artist and I want to review The Quiltmaker's Gift.
Back
Back