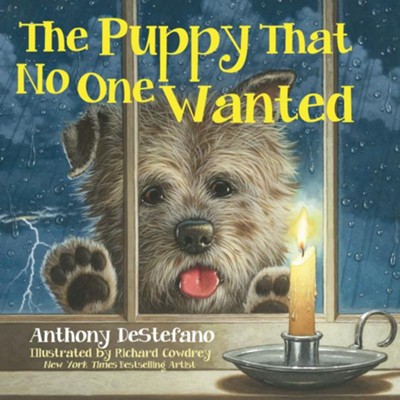 The Puppy That No One Wanted

▼▲
Bestselling author Anthony DeStefano teams up once again with renowned illustrator Richard Cowdrey to tell the tale of a scraggly, smelly little puppy who never loses hope that one day he will find a home of his own with a family to love. One rainy night, his dream comes true in an unexpected way when he meets a very special family. Rich in biblical imagery, this simple story of an adorable lonely puppy reveals the profound truth that all of us are really outcasts in life—and can only find our true home in God.

▼▲
Anthony DeStefano is a member of the board of directors of Priests for Life and Rachel’s Vineyard. He has appeared on many national television and radio programs, including Fox’s America’s Newsroom, Fox and Friends, CNN, EWTN, the 700 Club, the Praise the Lord network, Focus on the Family Radio, and Al Kresta. He is the author of five books for adults, including A Travel Guide to Life: Transforming Yourself from Head to Soul, which served as the basis for the EWTN television series of the same name. Anthony has written several bestselling children’s books, including This Little Prayer of Mine, Little Star, The Donkey That No One Could Ride, A Travel Guide to Heaven for Kids, and The Sheep That No One Could Find.


Richard Cowdrey is well-known for illustrating many beautiful children’s books, including New York Times bestsellers Bad Dog, Marley! and Marley Goes to School. Over the past twenty-five years he has worked with many publishers including Harper Collins, Scholastic Inc., Simon & Schuster, Zondervan, Random House, Harcourt, Penguin, Workman Publishing, and Harvest House. Richard’s love for family and nature overflows into his illustrations which are enjoyed by children around the world. The artist and his wife live in Ohio and have four grown children and five grandchildren.

▼▲
I'm the author/artist and I want to review The Puppy That No One Wanted.
Back